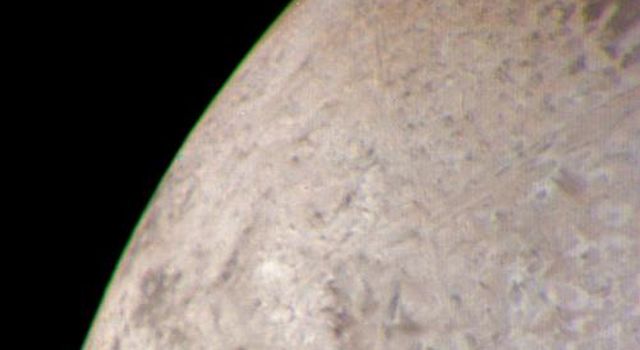 The Limb of Triton
The smallest features that can be seen in this false color image of Neptune's largest satellite, Triton, are about 47 km (29 miles) across. The image, taken by Voyager 2 early in the morning of Aug. 23, 1989, is a composite of three images taken through ultraviolet, green, and violet filters. The image offers an example of the kinds of puzzles scientists face on the eve of an encounter: Mottling in the bright southern hemisphere may be the result of topography, if Triton's crust is predominantly water ice, which is rigid at Triton's surface temperature. Alternatively, the mottling could be due to markings on a smooth surface, if the crust is composed of nitrogen, carbon monoxide, or methane ice, since they are soft at the same temperature. The Voyager Mission is conducted by JPL for NASA's Office of Space Science and Applications.
View all Images