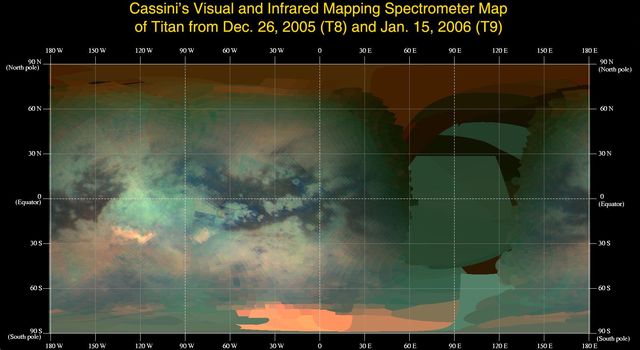 An Infrared Map of Titan 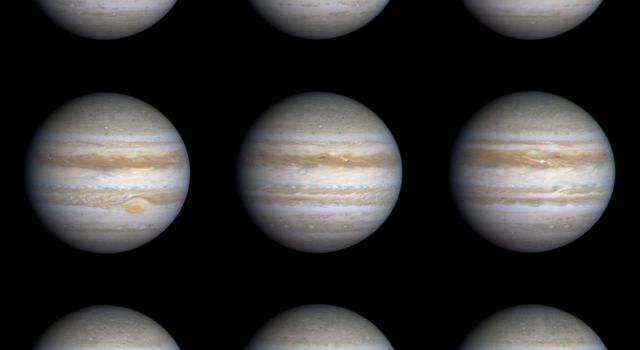 These false-color images were constructed from images taken at the following wavelengths: 1.6 microns (blue), 2.01 (green), and 5 microns (red).

The viewing geometry of the December flyby is roughly on Titan's opposite hemisphere from the flybys in October and January. There are several important features to note in the images. The first is that the south polar cloud system was very bright during the December flyby, while during the October and January flybys, it is barely visible, indicating that the atmosphere over Titan's south pole is very dynamic.

In the December (middle) mosaic, a north polar hood that is bright at 5 microns is visible. Its composition is unknown. The north polar hood is barely seen in the October (left image) and January (right image) data. Visible in the October and January images just south of the equator is Tui Reggio, a region nicknamed the "chevron." This region is very bright at 5 microns and is among the brightest features on Titan at that wavelength. Tui Reggio is thought to be a surface deposit, probably of volcanic origin, and may be water and/or carbon dioxide frozen from the vapor. The January flyby data show that the western margins of Tui Reggio have a complex flow-like character consistent with eruptive phenomena.

The Cassini-Huygens mission is a cooperative project of NASA, the European Space Agency and the Italian Space Agency. The Jet Propulsion Laboratory, a division of the California Institute of Technology in Pasadena, manages the mission for NASA's Science Mission Directorate, Washington, D.C. The Cassini orbiter was designed, developed and assembled at JPL. The visual and infrared mapping spectrometer team is based at the University of Arizona.

For more information about the Cassini-Huygens mission http://saturn.jpl.nasa.gov/home/index.cfm The visual and infrared mapping spectrometer team homepage is at http://wwwvims.lpl.arizona.edu.