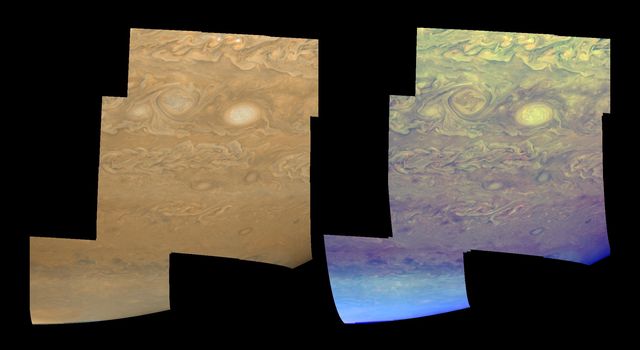 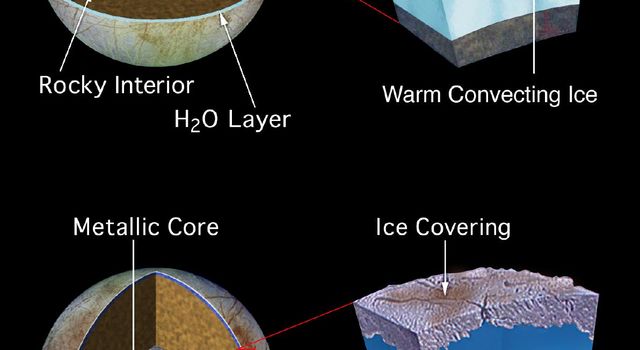 Cloud features north of Jupiter's equator, in the region between 3 and 30 degrees north latitude, are shown in approximately true color (left mosaic) and in false color (right mosaic). The false color is used to reveal the heights and thicknesses of Jupiter's clouds. The left mosaic was taken about 40 minutes after the right mosaic, when the cloud features had rotated with the planet to Jupiter's curved limb. The images were taken by NASA's Galileo spacecraft.

Both mosaics show the characteristic banded nature of Jupiter's clouds that results from latitudinal changes in cloud abundance and height, ultimately due to upward convection and horizontal winds in the atmosphere. The top of the mosaics shows a "conveyor belt" counterclockwise vortex (burnt orange oblong feature in false color) perhaps similar to the "brown barges" seen at slightly lower latitudes during NASA's Voyager mission. This oblong vortex is analogous to a low pressure region on Earth, characterized by downwelling air and depressed cloud levels. Below this feature are what appear to be the remnants of two convective plumes of cloud material (whiter patches in false color), now being sheared apart high in the atmosphere by east-west winds. The lower third of the mosaics shows the relatively cloud-free region where thermal infrared "hot spots" appear. The Galileo Probe descended into a hot spot in December 1995.

The left mosaic combines violet (410 nanometers) and near-infrared continuum (756 nanometers) images to create a mosaic similar to how Jupiter would appear to human eyes. The different colors are due to the composition and abundance of trace chemicals in Jupiter's atmosphere. The right mosaic uses Galileo's camera's three near-infrared (beyond the visible range) wavelengths (756 nanometers, 727 nanometers, and 889 nanometers displayed in red, green, and blue) to show variations in cloud height and thickness. Light blue clouds are high and thin, reddish clouds are deep, and white clouds are high and thick.

The left mosaic has been projected on a spheroid. The right one was mapped using equal increments of latitude and longitude. The smallest resolved features are tens of kilometers in size. North is toward the top of the mosaics. The images used were taken on Nov. 5, 1997, at a range of 1.44 million kilometers (895,000 miles) by the Solid State Imaging (SSI) system on NASA's Galileo spacecraft during its eleventh orbit of Jupiter.