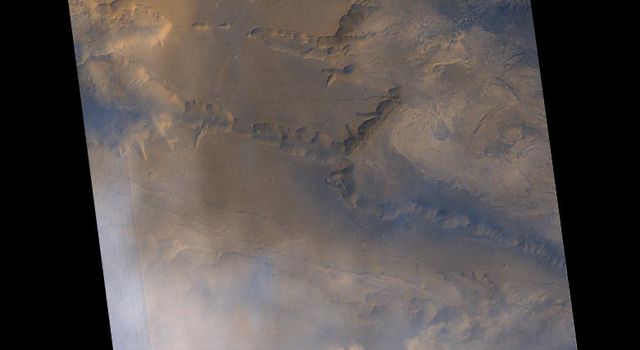 May 1999 Dust Storm in Valles Marineris 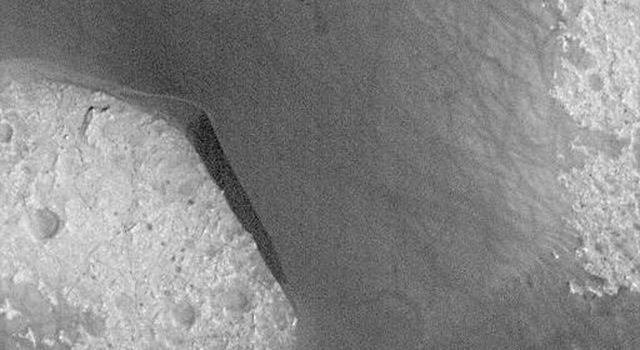 This Mars Global Surveyor (MGS) Mars Orbiter Camera (MOC) image was obtained during the first week of June 1999. It shows a portion of the Nilosyrtis Mensae region, located north of Syrtis Major and southwest of Utopia Planitia. This region is part of a planet-wide transition zone that separates the high, cratered terrain of the southern two thirds of Mars from the low, relatively uncratered northern plains. Old remnants of the cratered highlands are common in this transition zone, and they are usually in the form of mesas and buttes.

The MOC image shows several low, flat-topped mesas. Although flat at large scale, their surfaces are quite rough and bumpy at smaller scales. Many of these bumps might be boulders, but the resolution of this particular image (4.5 meters--15 feet--per pixel) is not high enough to be certain. The lowlands surrounding the mesas are cracked and pitted--especially the darker surfaces on the right side of the image. The cause of the pitting is not known and can only be speculated upon (because the material removed from each pit is now gone). Possible origins for the pits include removal of dust or sand by wind and/or sublimation of ice from the near subsurface. The picture covers an area 3 kilometers (1.9 miles) wide and is illuminated from the left.