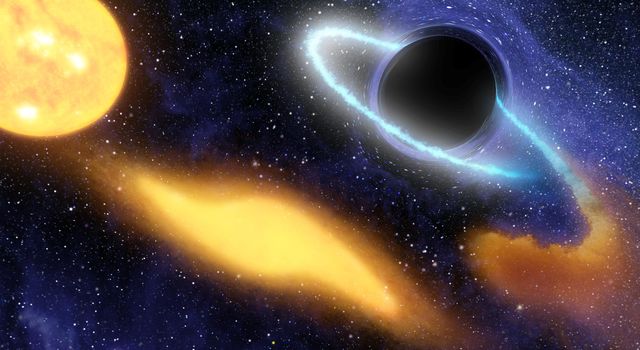 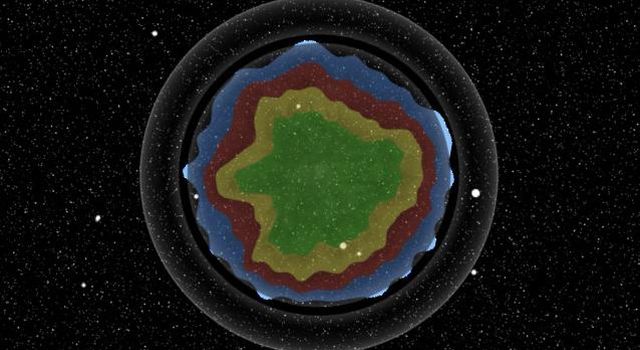 This artist's concept illustrates a massive star before and after it blew up in a cataclysmic "supernova" explosion. NASA's Spitzer Space Telescope found evidence that this star -- the remains of which are named Cassiopeia A -- exploded with some degree of order, preserving chunks of its onion-like layers as it blasted apart.

Cassiopeia A is located 10,000 light-years away in the constellation Cassiopeia. It was once a massive star 15 to 20 times larger than our sun. Its fiery death would have been viewable from Earth about 340 years ago.

The top figure shows the star before it died, when its layers of elements were stacked neatly, with the heaviest at the core and the lightest at the top. Spitzer found evidence that these layers were preserved when the star exploded, flinging outward in all directions, but not at the same speeds. As a result, some chunks of the layered material traveled farther out than others, as illustrated in the bottom drawing.

The infrared observatory was able to see the tossed-out layers, because they light up upon ramming into a "reverse" shock wave created in the aftermath of the explosion. When a massive star explodes, it creates two types of shock waves. The forward shock wave darts out quickest, and, in the case of Cassiopeia A, is now traveling at supersonic speeds up to 7,500 kilometers per second (4,600 miles/second). The reverse shock wave is produced when the forward shock wave slams into a shell of surrounding material expelled before the star died. It tags along behind the forward shock wave at slightly slower speeds.

Chunks of the star that were thrown out fastest hit the shock wave sooner and have had more time to heat up to scorching temperatures previously detected by X-ray and visible-light telescopes. Chunks of the star that lagged behind hit the shock wave later, so they are cooler and radiate infrared light that was not seen until Spitzer came along. These lagging chunks are made up of gas and dust containing neon, oxygen and aluminum -- elements from the middle layers of the original star.