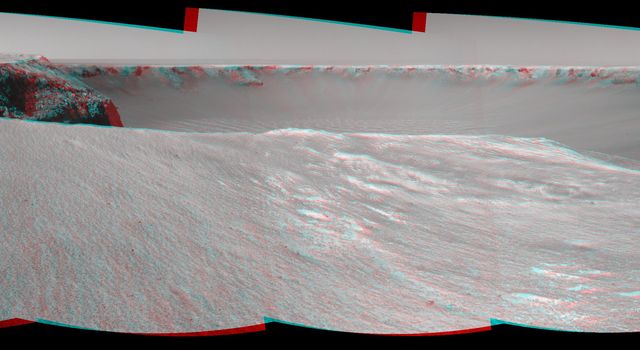 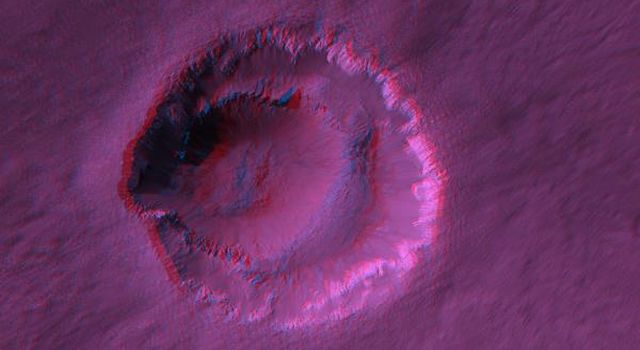 The High Resolution Imaging Science Experiment on NASA's Mars Reconnaissance Orbiter has imaged "Victoria Crater" three times. This stereo view combines two of those views. The red-colored image is TRA_000873_1780 and was acquired with the orbiter pointed 3.84 degrees to the west. The blue-color image is PSP_001414_1780 and was acquired with the orbiter pointed 16.2 degrees to the west. To see the topography, view this image through glasses with a red filter for your left eye, and a blue or blue-green filter for your right eye. The difference in viewing angle between the two images is about 12 degrees, which is greater than the convergence angle between the left and right eyes of humans while viewing distant objects, so the vertical relief appears much steeper than is actually the case. While some of the cliffs around the crater are in fact vertical, the slopes below the cliffs are no steeper than 30 degrees.

NASA's Jet Propulsion Laboratory, a division of the California Institute of Technology in Pasadena, manages the Mars Reconnaissance Orbiter for NASA's Science Mission Directorate, Washington. Lockheed Martin Space Systems is the prime contractor for the project and built the spacecraft. The High Resolution Imaging Science Experiment camera was built by Ball Aerospace Corporation and is operated by the University of Arizona.