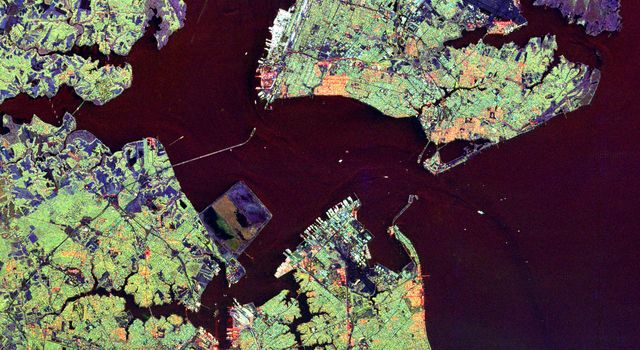 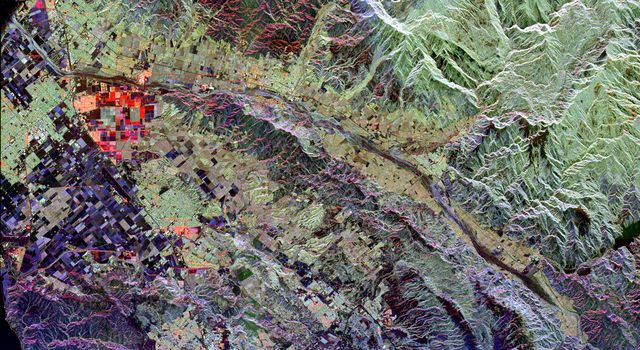 This is a spaceborne radar image of the city of Sacramento, the capital of California. Urban areas appear pink and the surrounding agricultural areas are green and blue. The Sacramento River is the curving dark line running from the left side of the image (northwest) to the bottom right. The American River is the dark curving line in the center. Sacramento is built at the junction of these two rivers and the state Capitol building is in the bright pink-white area southeast of the junction. The straighter dark line (lower center) is the Sacramento River Deep Water Ship Channel which allows ship access from San Francisco. The black areas in the center are the runways of the Sacramento Executive airport. The city of Davis, California is seen as a pink area in lower left.

This image was acquired by Spaceborne Imaging Radar-C/X-Band Synthetic Aperture Radar (SIR-C/X-SAR) onboard the space shuttle Endeavour on October 2, 1994. The image is 27.0 kilometers by 38.4 kilometers (17 miles by 24 miles) and is centered at 38.6 degrees North latitude, 125.1 degrees West longitude. North is toward the upper left. The colors are assigned to different radar frequencies and polarizations of the radar as follows: red is L-band, horizontally transmitted and received; green is C-band, horizontally transmitted and received; and blue is C-band, horizontally transmitted, vertically received. SIR-C/X-SAR, a joint mission of the German, Italian, and United States space agencies, is part of NASA's Mission to Planet Earth.