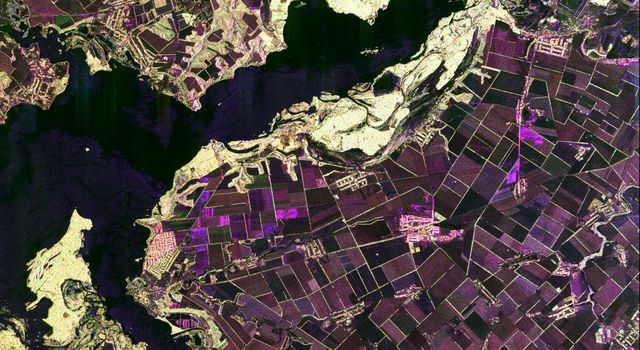 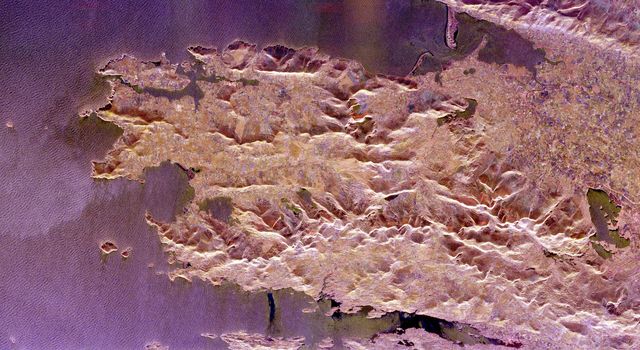 This spaceborne radar image shows a segment of the Columbia River as it passes through the area of Wenatchee, Washington, about 220 kilometers (136 miles) east of Seattle. The Wenatchee Mountains, part of the Cascade Range, are shown in green at the lower left of the image. The Cascades create a "rain shadow" for the region, limiting rainfall east of the range to less than 26 centimeters (10 inches) per year. The radar's ability to see different types of vegetation is highlighted in the contrast between the pine forests, that appear in green and the dry valley plain that shows up as dark purple. The cities of Wenatchee and East Wenatchee are the grid-like areas straddling the Columbia River in the left center of the image. With a population of about 60,000, the region produces about half of Washington state's lucrative apple crop. Several orchard areas appear as green rectangular patches to the right of the river in the lower right center. Radar images such as these can be used to monitor land use patterns in areas such as Wenatchee, that have diverse and rapidly changing urban, agricultural and wild land pressures.

This image was acquired by Spaceborne Imaging Radar-C/X-Band Synthetic Aperture Radar (SIR-C/X-SAR) onboard the space shuttle Endeavour on October 10, 1994. The image is 38 kilometers by 45 kilometers (24 miles by 30 miles) and is centered at 47.3 degrees North latitude, 120.1 degrees West longitude. North is toward the upper left. The colors are assigned to different radar frequencies and polarizations of the radar as follows: red is L-band, horizontally transmitted and received; green is L-band, horizontally transmitted, vertically received; and blue is C-band, horizontally transmitted, vertically received. SIR-C/X-SAR, a joint mission of the German, Italian, and United States space agencies, is part of NASA's Mission to Planet Earth.