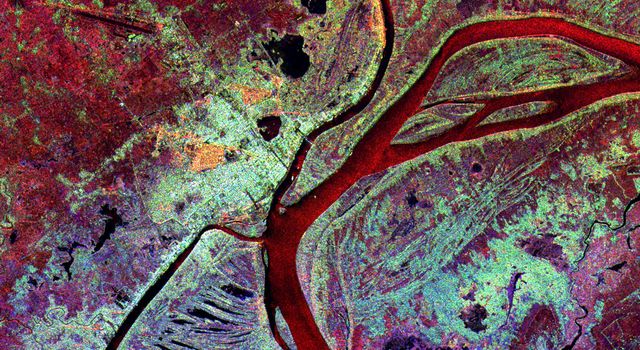 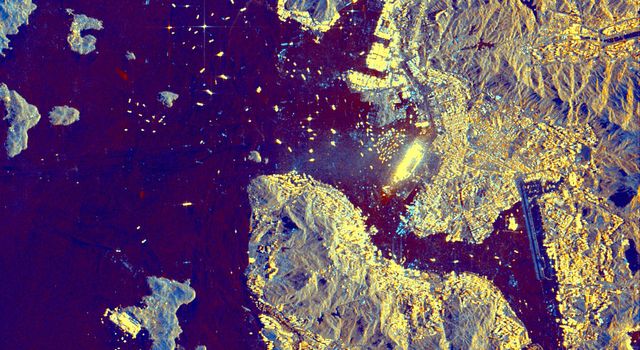 This spaceborne radar image of Munich, Germany illustrates the capability of a multi-frequency radar system to highlight different land use patterns in the area surrounding Bavaria's largest city. Central Munich is the white area at the middle of the image, on the banks of the Isar River. Pink areas are forested, while green areas indicate clear-cut and agricultural terrain. The Munich region served as a primary "supersite" for studies in ecology, hydrology and radar calibration during the Spaceborne Imaging Radar-C/X-Band Synthetic Aperture Radar (SIR-C/X-SAR) missions. Scientists were able to use these data to map patterns of forest damage from storms and areas affected by bark beetle infestation.

The image was acquired by SIR-C/X-SAR onboard the space shuttle Endeavour on April 18, 1994. The image is 37 kilometers by 32 kilometers (23 miles by 20 miles) and is centered at 48.2 degrees North latitude, 11.5 degrees East longitude. North is toward the upper right. The colors are assigned to different radar frequencies and polarizations of the radar as follows: red is L-band, vertically transmitted and horizontally received; green is C-band, vertically transmitted and horizontally received; and blue is C-band vertically transmitted and received. SIR-C/X-SAR, a joint mission of the German, Italian, and United States space agencies, is part of NASA's Mission to Planet Earth.