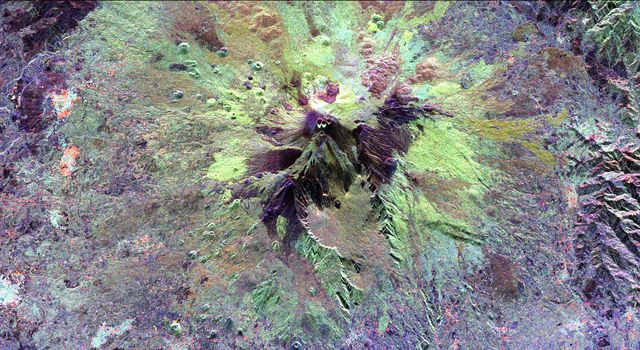 The active volcano Sakura-Jima on the island of Kyushu, Japan is shown in the center of this radar image. The volcano occupies the peninsula in the center of Kagoshima Bay, which was formed by the explosion and collapse of an ancient predecessor of today's volcano. The volcano has been in near continuous eruption since 1955. Its explosions of ash and gas are closely monitored by local authorities due to the proximity of the city of Kagoshima across a narrow strait from the volcano's center, shown below and to the left of the central peninsula in this image. City residents have grown accustomed to clearing ash deposits from sidewalks, cars and buildings following Sakura-jima's eruptions. The volcano is one of 15 identified by scientists as potentially hazardous to local populations, as part of the international "Decade Volcano" program.