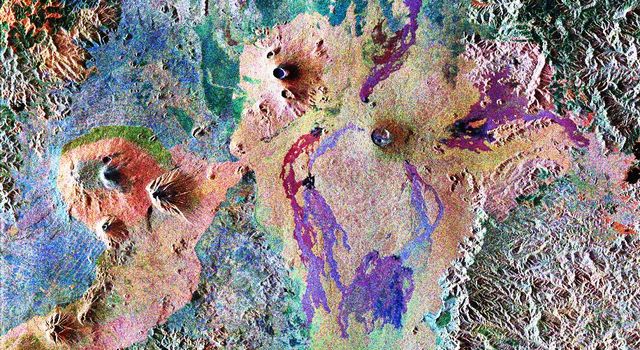 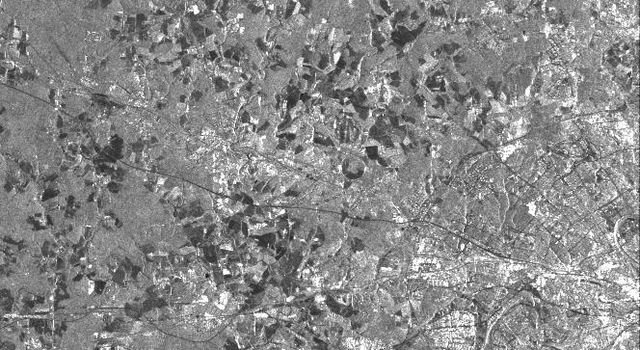 These two false-color images of the Manaus region of Brazil in South America were acquired by the Spaceborne Imaging Radar-C and X-band Synthetic Aperture Radar on board the space shuttle Endeavour. The image at left was acquired on April 12, 1994, and the image at right was acquired on October 3, 1994. The area shown is approximately 8 kilometers by 40 kilometers (5 miles by 25 miles). The two large rivers in this image, the Rio Negro (at top) and the Rio Solimoes (at bottom), combine at Manaus (west of the image) to form the Amazon River. The image is centered at about 3 degrees south latitude and 61 degrees west longitude. North is toward the top left of the images.

The extent of the flooding is much greater in the April image than in the October image and appears to follow the 10-meter (33-foot) annual rise and fall of the Amazon River. The flooded forest is a vital habitat for fish, and floating meadows are an important source of atmospheric methane. These images demonstrate the capability of SIR-C/X-SAR to study important environmental changes that are impossible to see with optical sensors over regions such as the Amazon, where frequent cloud cover and dense forest canopies block monitoring of flooding. Field studies by boat, on foot and in low-flying aircraft by the University of California at Santa Barbara, in collaboration with Brazil's Instituto Nacional de Pesguisas Estaciais, during the first and second flights of the SIR-C/X-SAR system have validated the interpretation of the radar images.