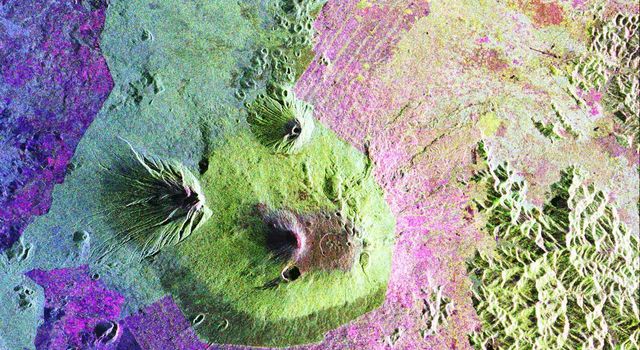 This is a radar image of the southwest portion of the buried Chicxulub impact crater in the Yucatan Peninsula, Mexico. The radar image was acquired on orbit 81 of space shuttle Endeavour on April 14, 1994 by the Spaceborne Imaging Radar C/X-Band Synthetic Aperture Radar (SIR-C/X-SAR). The image is centered at 20 degrees north latitude and 90 degrees west longitude.

Scientists believe the crater was formed by an asteroid or comet which slammed into the Earth more than 65 million years ago. It is this impact crater that has been linked to a major biological catastrophe where more than 50 percent of the Earth's species, including the dinosaurs, became extinct. The 180-to 300-kilometer-diameter (110- to 180-mile) crater is buried by 300 to 1,000 meters (1,000 to 3,000 feet) of limestone. The exact size of the crater is currently being debated by scientists.

This is a total power radar image with L-band in red, C-band in green, and the difference between C-band L-band in blue. The 10-kilometer-wide (6-mile) band of yellow and pink with blue patches along the top left (northwestern side) of the image is a mangrove swamp. The blue patches are islands of tropical forests created by freshwater springs that emerge through fractures in the limestone bedrock and are most abundant in the vicinity of the buried crater rim. The fracture patterns and wetland hydrology in this region are controlled by the structure of the buried crater. Scientists are using the SIR-C/X-SAR imagery to study wetland ecology and help determine the exact size of the impact crater.

Spaceborne Imaging Radar-C and X-band Synthetic Aperture Radar (SIR-C/X-SAR) is part of NASA's Mission to Planet Earth. The radars illuminate Earth with microwaves allowing detailed observations at any time, regardless of weather or sunlight conditions. SIR-C/X-SAR uses three microwave wavelengths: L-band (24 cm), C-band (6 cm) and X-band (3 cm). The multi-frequency data will be used by the international scientific community to better understand the global environment and how it is changing. The SIR-C/X-SAR data, complemented by aircraft and ground studies, will give scientists clearer insights into those environmental changes which are caused by nature and those changes which are induced by human activity.

SIR-C was developed by NASA's Jet Propulsion Laboratory. X-SAR was developed by the Dornier and Alenia Spazio companies for the German space agency, Deutsche Agentur fuer Raumfahrtange-legenheiten (DARA), and the Italian space agency, Agenzia Spaziale Italiana (ASI), with the Deutsche Forschungsanstalt fuer Luft und Raumfahrt e.v.(DLR), the major partner in science, operations, and data processing of X-SAR. Research on the biological effects of the Chicxulub impact is supported by the NASA Exobiology Program.