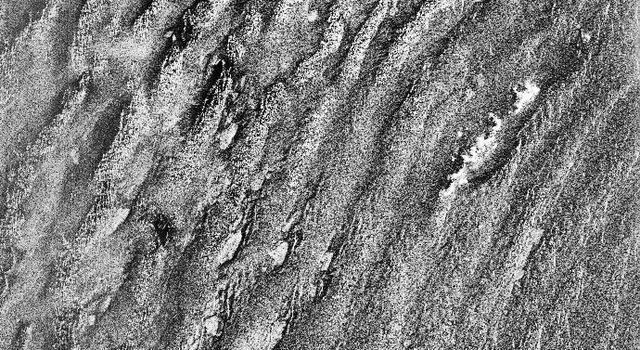 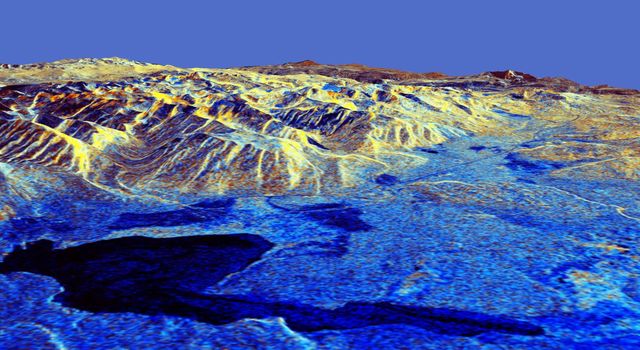 This is a three-frequency false color image of Flevoland, The Netherlands, centered at 52.4 degrees north latitude, 5.4 degrees east longitude. This image was acquired by the Spaceborne Imaging Radar-C and X-Band Synthetic Aperture Radar (SIR-C/X-SAR) aboard space shuttle Endeavour on April 14, 1994. It was produced by combining data from the X-band, C-band and L-band radars. The area shown is approximately 25 kilometers by 28 kilometers (15-1/2 by 17-1/2 miles).

Flevoland, which fills the lower two-thirds of the image, is a very flat area that is made up of reclaimed land that is used for agriculture and forestry. At the top of the image, across the canal from Flevoland, is an older forest shown in red; the city of Harderwijk is shown in white on the shore of the canal. At this time of the year, the agricultural fields are bare soil, and they show up in this image in blue. The changes in the brightness of the blue areas are equal to the changes in roughness. The dark blue areas are water and the small dots in the canal are boats.

This SIR-C/X-SAR supersite is being used for both calibration and agricultural studies. Several soil and crop ground-truth studies will be conducted during the shuttle flight. In addition, about 10calibration devices and 10 corner reflectors have been deployed to calibrate and monitor the radar signal. One of these transponders can be seen as a bright star in the lower right quadrant of the image. This false-color image was made using L-band total power in the red channel, C-band total power in the green channel, and X-band VV polarization in the blue channel.