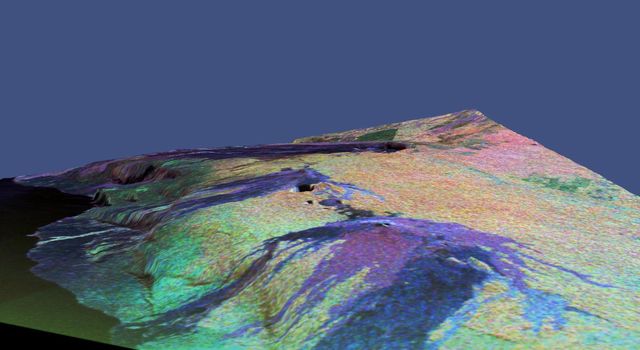 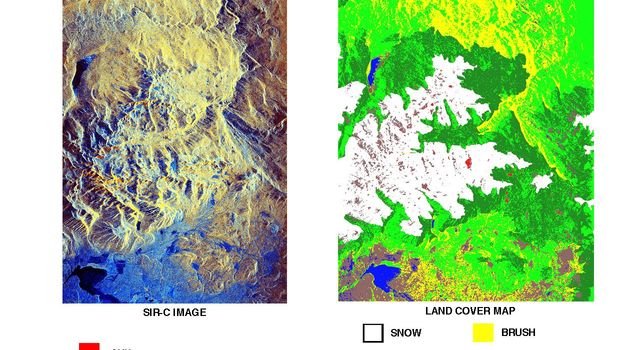 This is a false-color, three-frequency image of the Oberpfaffenhofen supersite, southwest of Munich in southern Germany, which shows the differences in what the three radar bands can see on the ground. The image covers a 27- by 36-kilometer (17- by 22-mile) area. The center of the site is 48.09 degrees north and 11.29 degrees east.

The image was acquired by the Spaceborne Imaging Radar C/X-Band Synthetic Aperture Radar (SIR-C/X-SAR) onboard space shuttle Endeavour on April 13, 1994, just after a heavy storm which covered the all area with 20 centimeters (8 inches) of snow. The dark area in the center of the image is Lake Ammersee. The two smaller lakes above the Ammersee are the Worthsee and the Pilsensee. On the right of the image is the tip of the Starnbergersee. The outskirt of the city of Munich can be seen at the top of the image.

The Oberpfaffenhofen supersite is the major test site for X-SAR calibration and scientific experiments such as ecology, hydrology and geology. This color composite image is a three-frequency overlay. L-band total power was assigned red, the C-band total power is shown in green and the X-band VV polarization appears blue. The colors on the image stress the differences between the L-band, C-band and X-band images. If the three frequencies were seeing the same thing, the image will appear in black and white. For example, the blue areas corresponds to area for which the X-band backscatter is relatively higher than the backscatter at L-and C-band; this behavior is characteristic of clear cuts or shorter vegetation. Similarly, the forested areas have a reddish tint. Finally, the green areas seen at the southern tip of both the Ammersee and the Pilsensee lakes indicate a marshy area.