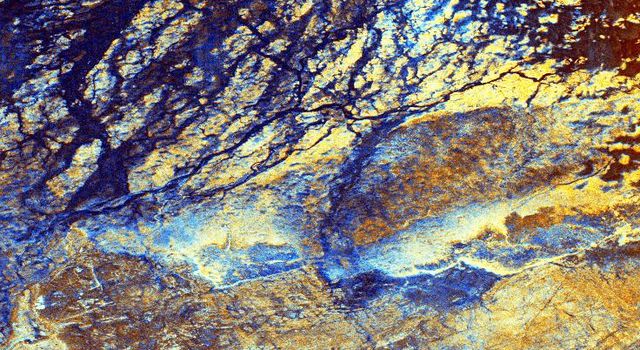 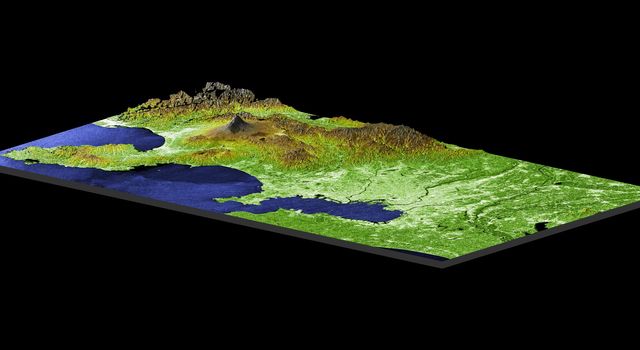 This image is a false-color composite of Raco, Michigan, centered at 46.39 degrees north latitude, 84.88 degrees west longitude. This image was acquired by the Spaceborne Imaging Radar-C and X-Band Synthetic Aperture Radar (SIR-C/X-SAR) aboard the space shuttle Endeavour on its sixth orbit and during the first full-capability test of the instrument on April 9, 1994.

This image was produced using both L-band and C-band data. The area shown is approximately 20 kilometers by 50 kilometers (12 by 30 miles). Raco is located at the eastern end of Michigan's upper peninsula, west of Sault Ste. Marie and south of Whitefish Bay on Lake Superior. The site is located at the boundary between the boreal forests and the northern temperate forests, a transitional zone that is expected to be ecologically sensitive to anticipated global changes resulting from climatic warming. On any given day, there is a 60 percent chance that this area will be obscured to some extent by cloud clover which makes it difficult to image using optical sensors.

In this color representation (red=LHH,green=LHV, blue=CHH), darker areas in the image are smooth surfaces such as frozen lakes and other non-forested areas. The colors are related to the types of trees and the brightness is related to the amount of plant material covering the surface, called forest biomass. The black area in the upper right corner is the ice-covered Lake Superior. The blue mosaic areas in the lower part of the image are bare agricultural fields with hay stubble. The large blue area to the center left of the image corresponds to a large frozen swamp with no trees and lots of grass tufts. The light greenish-yellow areas are red pine trees approximately 30 meters (100 feet) in height. The brownish yellow areas are jack pine trees of various ages. The dark patches are areas of recent clear cuts in the managed Hiawatha National Forest. The shore line of Lake Superior in the light greenish blue is a mixture of aspen and birch trees. South of that, surrounding McNearny and Johnson lakes is a dark purple area containing north hardwoods. Accurate information about land-cover is important to area resource managers and for use in regional-to-global-scale scientific models used understand global change.