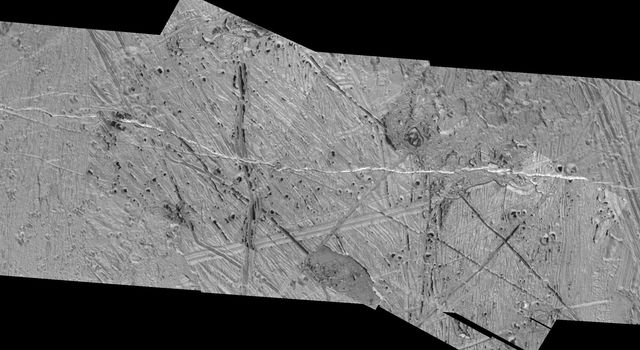 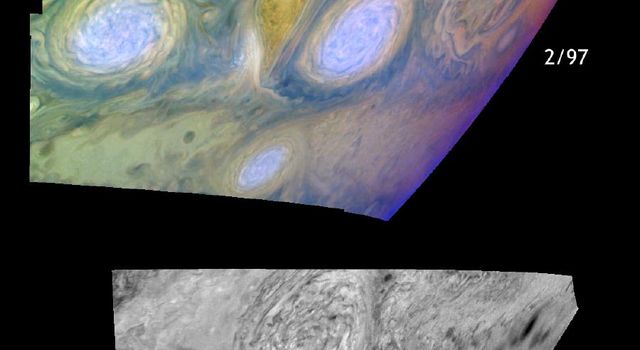 Historic Merger of Storms on Jupiter

These four views of Jupiter's moon Io clearly show airborne plumes of gas and dust from two of Io's active volcanoes, Zamama and Prometheus. The bottom row consists of enlargements of the plume areas. The first view (left) depicts the tops of both plumes on Io's bright limb or edge. In the second image, an excellent view of Zamama on the bright limb reveals the umbrella-shaped structure. The third image also shows both plumes as bright spots against Io's illuminated crescent. In the fourth view (right) where the volcanic centers lie beyond the terminator (day-night boundary), the tall plumes are visible because they extend up into sunlight. The plumes have a height of about 100 kilometers (60 miles). Both plumes have been active throughout the Galileo tour of the Jovian system which began in 1996. Zamama, however, is considerably larger and brighter in these images from the spacecraft's eleventh orbit of Jupiter than when imaged previously. Prometheus was also active during 1979 flybys of NASA's Voyager spacecraft. There are two other much fainter plumes that can be detected on the bright limb of the third and fourth images. See if you can find them by changing the brightness levels of the images to enhance the dark regions.

North is to the top of the picture. To make the plumes easier to see, the colors have been enhanced by increasing the brightness at the blue end of the spectrum. Since the images shown were taken over an extended period of time, the resolutions range from 8 to 12 kilometers (5 to 7.5 miles) per picture element. The images were taken on November 7th and 8th, 1997by the Solid State Imaging (SSI) system on NASA's Galileo spacecraft at ranges in excess of 800,000 kilometers (500,000 miles).

This image and other images and data received from Galileo are posted on the World Wide Web, on the Galileo mission home page at URLhttp://solarsystem.nasa.gov/galileo/. Background information and educational context for the images can be found at http://www.jpl.nasa.gov/galileo/sepo.