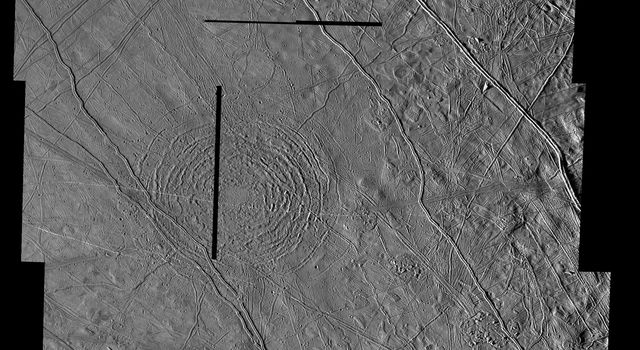 The Tyre multi-ring Structure on Europa 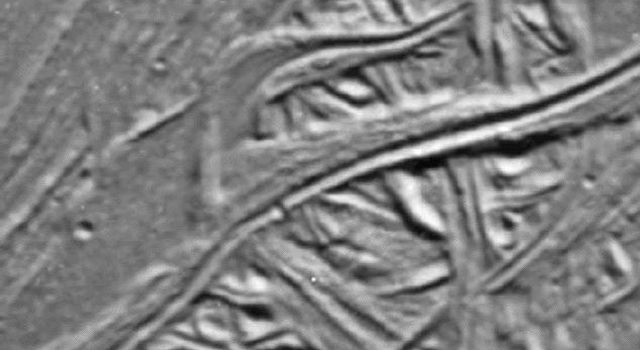 This view of the south polar region of Jupiter's moon Europa shows part of a gray band that formed as plates on the icy surface separated and material filled in the widening gap. North is to the top of the picture. In the center of the image, a gently curving linear crack runs north to south and appears to be the location where the fault originally opened. Successive layers, like tree rings, form as material enters the gap periodically from below and hardens.

The relative motion of the two opposing sides of the band is mostly "strike-slip," where two crustal blocks move horizontally past one another, similar to two opposing lanes of traffic. However, since this motion is not exactly parallel to the active crack, the opposite sides also pull apart to create openings through which warmer, softer ice from below Europa's brittle ice shell surface, or frozen water from a possible subsurface ocean, could reach the surface. The band surface accumulates layer by layer. A rough symmetry with respect to the active central linear crack can be seen in these layers.

The curved, lined area is a small part of a much larger strike-slip fault called Astypalaea Linea. This fault extends over 800 kilometers (500 miles), roughly the distance of the portion of California's San Andreas fault from the Mexican border to the San Francisco Bay. Galileo images show that the Europan fault has slipped about 50 kilometers (30 miles).

The Sun illuminates the surface from the top. The image, centered at 66 degrees south latitude and 195 degrees west longitude, covers an area approximately 24 by 16 kilometers (15 by 10 miles). The resolution is 40 meters (131 feet) per picture element. The images were taken on September 26, 1998 at a range of less than 4,200 kilometers (2,600 miles) by Galileo's solid-state imaging system.