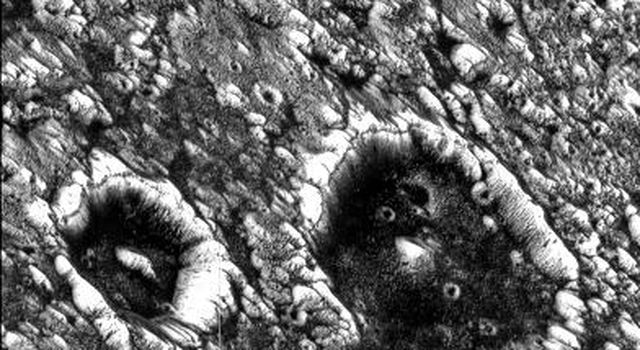 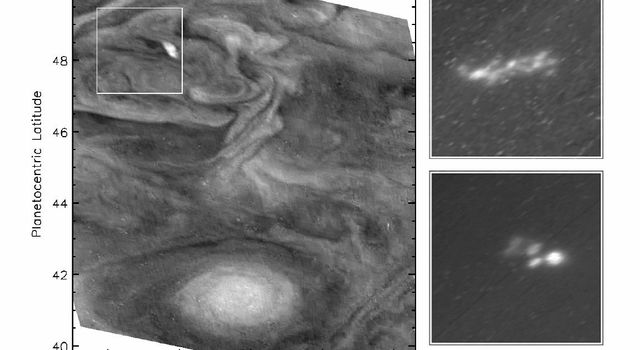 Jovian Lightning and the Daytime Storm

This false-color picture of a convective thunderstorm 10,000 kilometers (6,218 miles) northwest of Jupiter's Great Red Spot was obtained by NASA's Galileo spacecraft on June 26, 1996. The white cloud in the center is a tall, thick cloud 1,000 kilometers (620 miles) across, standing 25 kilometers (15 miles) higher than most of the surrounding clouds. Its base extends off to the left and appears red in this representation. This red color indicates that the cloud base is very deep in the atmosphere, about 50 kilometers (30 miles) below the surrounding clouds. Most of the wisps and features in Jupiter's clouds are thick and thin ammonia clouds, forming at a pressure just less than Earth's sea level pressure. On Jupiter, water is the only substance to form a cloud at a depth where the pressure is about five times the Earth's sea level pressure. The red base of this thunderstorm is so deep that it can only be a water cloud.

In 1979 NASA's Voyager spacecraft saw convective clouds of this type near the Great Red Spot. They erupted like this roughly once every 10 days and lasted a few days each. But Voyager's cameras could not allow the determination of the storms' altitude. It is thought that this storm is analogous to an Earth thunderstorm, with the cloud's high, bright, white portion comparable to the familiar anvil cloud on Earth. Whether any rain or snow is falling below this cloud is unknown, but there are indications that similar storms on Jupiter have lightning in them. The most dramatic difference between this storm and typical thunderstorms on Earth is the scale. The anvil of this storm is 1,000 km (620 miles) across and 75 km (46 miles) high. On Earth, the largest anvils are 200 km (124 miles) across and 18 km (11 miles) high.

Light at different wavelengths penetrates to different depths in Jupiter's atmosphere before being reflected by clouds. In this image, red represents data taken with the 756 nanometer (nm) filter, where Jupiter's atmospheric gases are mostly transparent and the light penetrates deeply. Blue and green represent data taken with the 889 and 727 nm filters, respectively, where the gases in Jupiter's atmosphere absorb strongly, so only high clouds can reflect the light. Thus, the blue and green areas depict higher clouds, while the red areas show deep clouds as well as higher clouds.