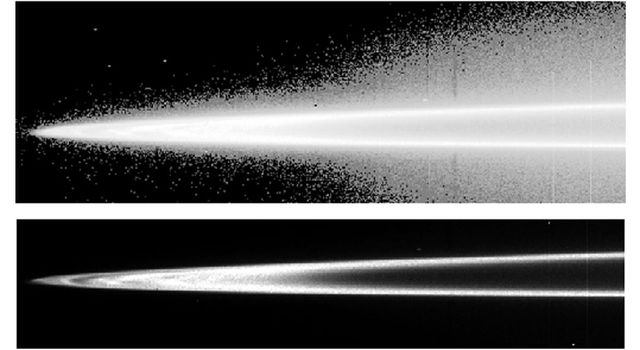 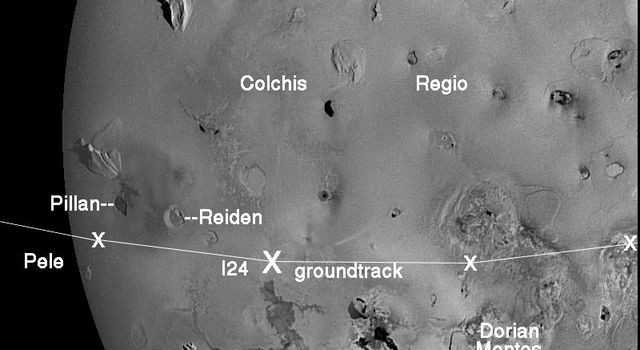 This mosaic of Jupiter's ring system was acquired by NASA's Galileo spacecraft when the Sun was behind the planet, and the spacecraft was in Jupiter's shadow peering back toward the Sun.

In such a configuration, very small dust-sized particles are accentuated so both the ring particles and the smallest particles in the upper atmosphere of Jupiter are highlighted. Such small particles are believed to have human-scale lifetimes, i.e., very brief compared to the solar system's age.

This composite of two mosaics was taken through the clear filter (610 nanometers) of the solid state imaging (CCD) system on November 9, 1996, during Galileo's third orbit of Jupiter. The ring was approximately 2,300,000 kilometers away. The resolution is approximately 46 kilometers per picture element from right to left; however, because the spacecraft was only about 0.5 degrees above the ring plane, the image is highly foreshortened in the vertical direction. The vertical bright arcs in the middle of the ring mosaics show the edges of Jupiter and are composed of images obtained by NASA's Voyager spacecraft in 1979.

This image and other images and data received from Galileo are posted on the World Wide Web, on the Galileo mission home page at URL http://solarsystem.nasa.gov/galileo/. Background information and educational context for the images can be found at http://www.jpl.nasa.gov/galileo/sepo.