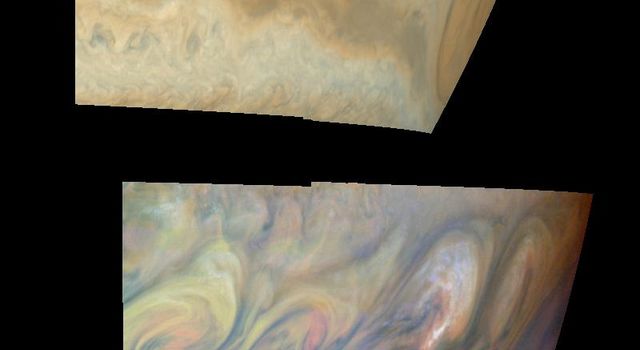 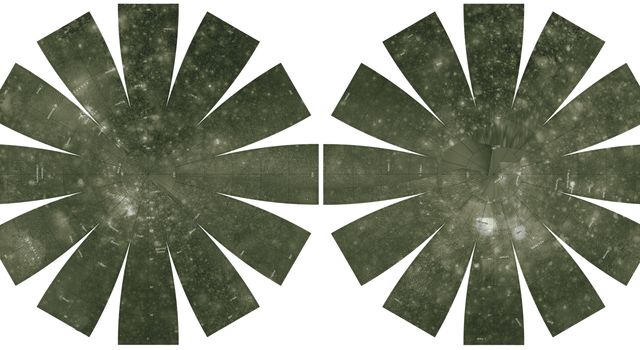 View of a boundary between bright and dark terrain at the southern border of Galileo Regio on Jupiter's moon, Ganymede. A narrow, 15 kilometer wide, band of fractured bright terrain runs from the upper left to lower right of this image. The dark terrain on either side of this band of bright terrain has been highly fractured in multiple directions by tectonic activity. The large bright circular feature in the upper right is probably an impact crater that has been topographically relaxed, perhaps indicating that the subsurface was warm in this region at some point in its history before the formation of the bright terrain. Such images help determine how the ancient dark terrain on Ganymede was converted into younger bright terrain.

North is to the top of the picture and the sun illuminates the surface from nearly overhead. The image, centered at 7 degrees latitude and 157 degrees longitude, covers an area approximately 81 by 58 kilometers. The resolution is 160 meters per picture element. The image was taken on May 7, 1997 at 15 hours, 21 minutes, 16 seconds Universal Time at a range of 16218 kilometers by the Solid State Imaging (SSI) system on NASA's Galileo spacecraft.

This image and other images and data received from Galileo are posted on the World Wide Web, on the Galileo mission home page at URL http://solarsystem.nasa.gov/galileo/. Background information and educational context for the images can be found at http://www.jpl.nasa.gov/galileo/sepo.