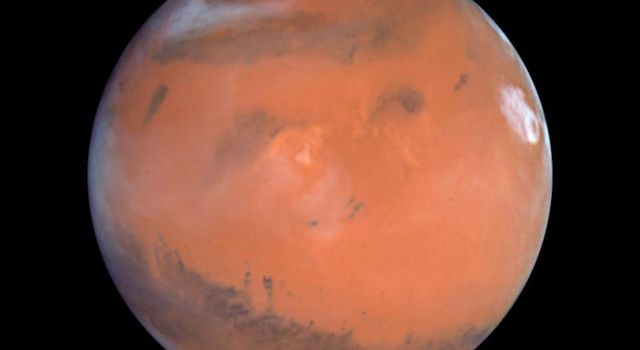 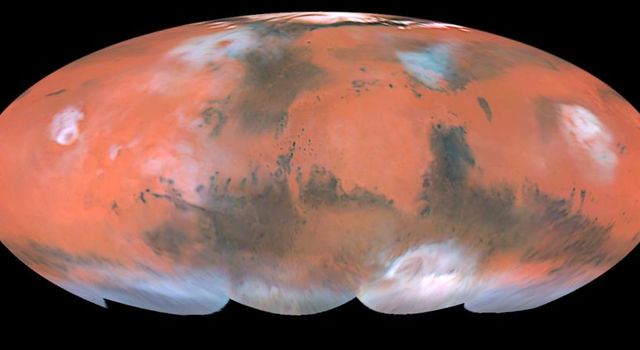 Taking advantage of Mars's closest approach to Earth in eight years, astronomers using NASA's Hubble Space Telescope have taken the space-based observatory's sharpest views yet of the Red Planet. NASA is releasing these images to commemorate the second anniversary of the Mars Pathfinder landing. The lander and its rover, Sojourner, touched down on the Red Planet's rolling hills on July 4, 1997, embarking on an historic three-month mission to gather information on the planet's atmosphere, climate, and geology.

The telescope's Wide Field and Planetary Camera 2 snapped images between April 27 and May 6, when Mars was 54 million miles (87 million kilometers) from Earth. From this distance the telescope could see Martian features as small as 12 miles (19 kilometers) wide. The telescope obtained four images PIA01587), which, together, show the entire planet.

This image is centered near the location of the Pathfinder landing site. Dark sand dunes that surround the polar cap merge into a large, dark region called Acidalia. This area, as shown by images from the Hubble telescope and other spacecraft, is composed of dark, sand-sized grains of pulverized volcanic rock. Below and to the left of Acidalia are the massive Martian canyon systems of Valles Marineris, some of which form long linear markings that were once thought by some to be canals. Early morning clouds can be seen along the left limb of the planet, and a large cyclonic storm composed of water ice is churning near the polar cap.