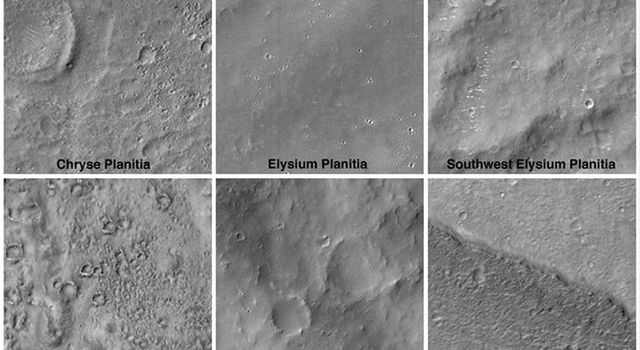 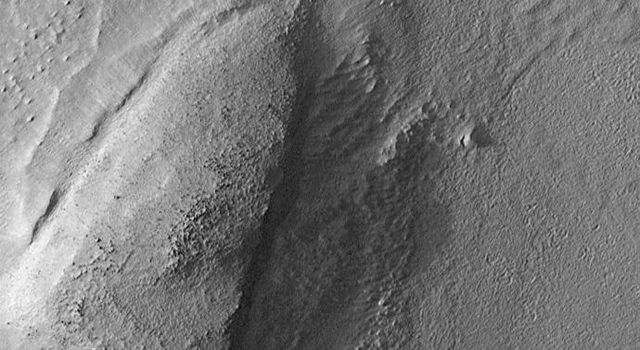 Mars Boulders: On a Hill in Utopia Planitia

The topography of Mars is grossly divided into two zones: low, uncratered plains that cover most of the northern hemisphere of Mars, and high-standing, heavily cratered areas that cover the southern and part of the northern hemisphere. Between these two zones is a third, characterized by a complicated mix of cliffs, mesas, buttes, straight-walled and sinuous canyons. This zone is known as the "fretted terrain" and is most common in northern Arabia, between latitudes 30°N and 50°N and longitudes 270°W and 360°W. The terrain in this zone appears as if something has destroyed the cratered terrain, leaving behind the lower plains. The processes that shape this terrain have puzzled Mars scientists since the region was discovered in Mariner 9 images of the early 1970s.

Steep-walled valleys with lineations--ridges and grooves--on their floors are common in the fretted terrain. The material comprising these valley floors is called lineated valley fill. In some of the best images taken by the Viking Orbiters in the late 1970s, some of the valley fill appeared to resemble alpine glaciers like those seen on Earth. Given this superficial similarity, some scientists assumed that the lineations on these valley floors might have formed by flow of ice in (and perhaps through) these canyons and valleys.

The Mars Global Surveyor (MGS) Mars Orbiter Camera (MOC) took a variety of pictures of the martian fretted terrain, particularly during the months of April through September of 1998. MOC image 46704 (above) was taken on August 2, 1998. It shows a very high resolution view of lineated valley fill on the floors of some straight, narrow canyons named the Coloe Fossae. The image reveals that the canyon walls are very smooth and generally featureless. The canyon floors display a complex set of ridges and grooves that are generally parallel to the cliffs, but in some places these are partly buried by a smooth-surfaced material. The general impression is that the ridges and grooves on the valley floors represent material that has been shed from the smooth canyon walls and was subsequently modified by wind. It is not clear whether any of this material is moving or flowing as it would in an ice-rich deposit (e.g., a glacier).