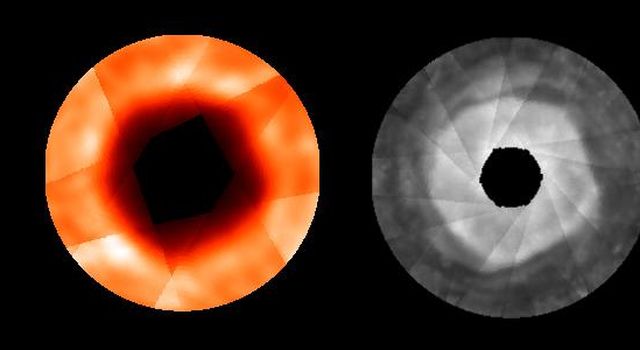 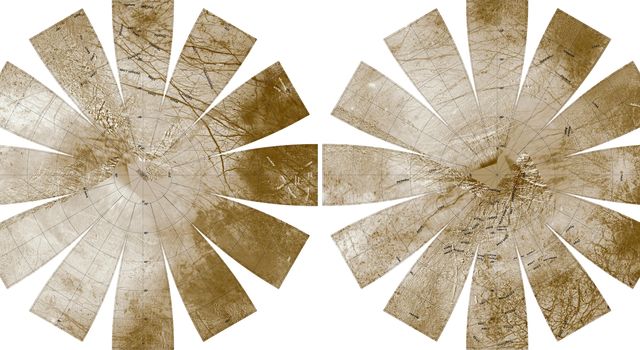 These images show a newly created large-scale storm on Jupiter, known as a white oval. This storm is the size of Earth and was observed by the Hubble Space Telescope and the Galileo spacecraft's photopolarimeter radiometer in July 1998. The color composite image shown in the upper panel was taken by the Hubble Space Telescope's Wide-Field/Planetary Camera on July 16, 1998. The image in the lower panel was created from data taken by Galileo's photopolarimeter experiment on July 20, 1998, and it is sensitive to Jupiter's atmospheric temperatures.

The white oval is believed to be the result of a merger between two smaller, 50-year-old ovals sometime in February, 1998. This white oval may be the strongest storm in the solar system outside Jupiter's 200-year old Great Red Spot. The Galileo spacecraft's measurements of the temperature field show that the feature is distinctly colder than its surroundings, as would be expected from rapidly upwelling winds in the center of the feature, and this temperature difference is at least as large as that of the two former white ovals. The temperature measurements also show that the feature to the left of the new white oval, once distinctly warmer that its surroundings (as expected of downdrafts) has cooled off.

More images and information on the Galileo mission are available on the Internet at http://galileo.jpl.nasa.gov .