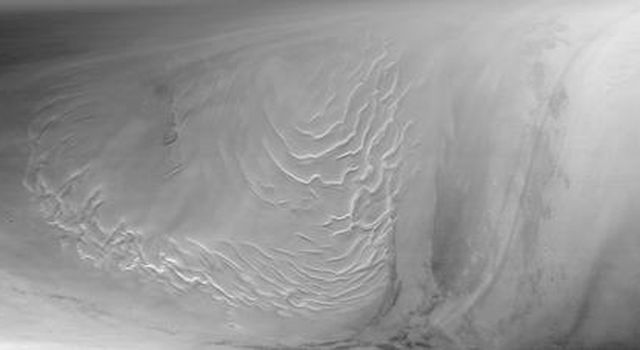 Mars Global Surveyor's Mars Orbiter Camera (MOC) continued to obtain images of the red planet during August and into September 1998. MOC has seen many features that address old questions and ideas about the geologic history of Mars.

Among the geological features examined by MOC in recent weeks--the enigmatic "Giant Polygons" on the martian northern plains. In the 1970s the Viking Orbiters saw huge cracks, some more than 1 kilometer (0.62 miles) wide, arranged in a polygonal pattern that outlined flat-lying areas sometimes 5 to 20 kilometers (3 to 12 miles) across. Giant polygons are most common in parts of Utopia Planitia and Acidalia Planitia, but there is also a cluster of them in the lowlands west of the Elysium volcanoes, on Elysium Planitia.

The exact origin of the giant polygons has never been determined. At first glance, they appear to resemble mud cracks that one might see on the surface of a dried-up puddle, pond, or lake. However, mud cracks and the polygonal patterns they create are small features--like the size of a human hand. The giant polygons on Mars are big enough to hold the entire downtown area of a moderate-sized city.

Mud cracks form by dessication-- i.e., the removal of water by evaporation (drying). Many ideas about the polygons on Mars have centered on the idea that they are somehow related to the dessication of thick layers of wet sediment-- perhaps deposited by some of the giant floods that Mars is known to have had. However, there has been considerable debate about whether the polygons formed in lava instead of sediment. Cooling lava might also crack and give the polygon texture, some have argued. Two observations have been made--using Viking images--that constrain the types of origins that can be proposed: (1) most of the "cracks" appear to be graben- -down-dropped blocks caused by faulting, and (2) some of the "cracks" appear to indicate the outlines of buried craters. These observations suggest that whatever caused the polygons, the process appears to be confined to material that has buried older terrain.

The new MOC image confirms the impression--from Viking images--that the polygon cracks-- troughs--are graben formed by faults. Unfortunately, the image does not provide ample information to distinguish between the various models for the origin of the polygons or the material in which they occur. The images, however, do show features of interest. The floors of the polygon troughs have bright, almost evenly spaced, windblown ripples or drifts(see also detailed sub-areas). Similar drifts can also be seen in and encroaching upon the surrounding, small impact craters. These drifts attest to the movement of sediment on the surface, and their brightness and shape suggests that they have not been active recently.