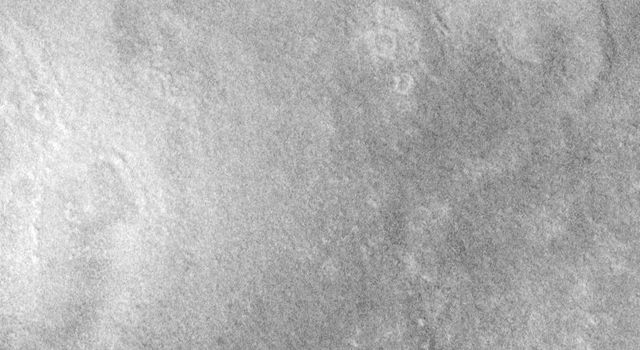 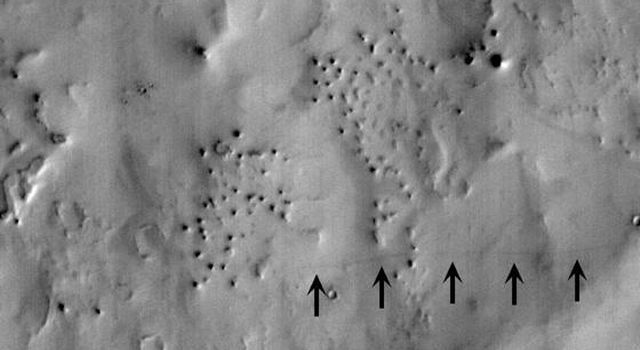 SUV Tracks On Mars? The 'Devil' is in the Details

Mars is famous for its giant volcanoes, such as Elysium Mons--observed by Mars Global Surveyor in July 1998--and the colossal Olympus Mons--3 times the height of Mt. Everest and as big as the U.S. state of Arizona. However, not all martian volcanoes are large. One of Mars Global Surveyor's most recent pictures, indeed, highlights one of Mars' tiniest volcanoes--a small "shield" volcano with a 2 kilometer (1.2 mile-) long depression at its summit.

The small volcano is located in the Tempe-Mareotis Fossae region of Tempe Terra (local context Viking 1 Orbiter image 627a28). Centered at 36.2°N, 85.1°W, this is one of many small volcanoes on Mars. The Mars Global Surveyor MOC image presented here is the first close-up view of one of these small volcanoes.

This volcano is similar in both shape and size to many of the small basalt shield volcanoes found on the Snake River Plain in southern Idaho, U.S.A. Other similar volcanic vents are found in Hawaii and Iceland. Basalt is the dark, iron- and magnesium-rich silicate rock found in places like the Snake River Plain, Hawaii, and Iceland. Basalt is also common on the floor of Earth's oceans and on the flat plains of the Moon known as maria.

The volcano seen in this MOC image does not show many of the features generally found around volcanoes of this size on Earth. Instead of the lava flows and leveed channels found on Earth, we see only a faint pattern of subtle, somewhat sinuous ridges and troughs that are radial to the long, elliptical summit depression (or caldera). This pattern gives the surface of the volcano and its surroundings quite a rough appearance. Much of the appearance of this "sandpaper-like" texture appears to be unrelated to the volcano, but is instead an expression of the eroded regolith--"soil"--that covers the old lava flows. The MOC image suggests that a person hiking around on this small martian volcano would find the walk pretty difficult (especially in a spacesuit).

But what an exciting and fascinating walk that would be. Not only would one be able to look, and even hike down, into the 150 m (460 foot) deep caldera, but one could also inspect the spectacular, regularly-spaced ridges seen on the floors of nearby troughs (e.g., in the lower 1/3 of this MOC image). These ridges are formed by wind and are probably composed of a mixture of sand and granules--perhaps reworked cinders from ancient volcanic eruptions in the region. Some windblown ridges can also be seen in the shadows on the floor of the volcano's linear caldera.

The MOC image was taken at 6:57 a.m. (PDT) on August 22, 1998, during the 506th orbit of Mars Global Surveyor as the spacecraft was nearing its 507th periapsis (closest point to the planet during the orbit). The local time (on Mars) was late in the afternoon--the Sun was only 10° above the horizon--equivalent to about 5:20 p.m.