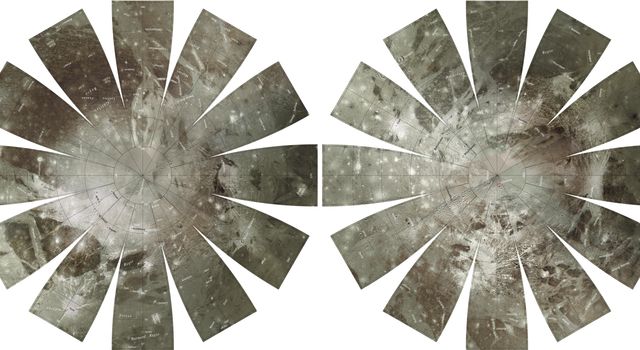 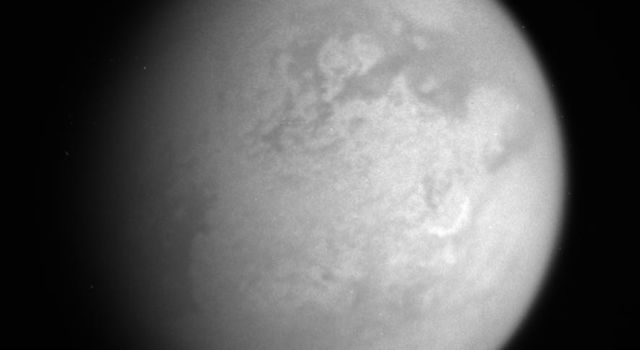 Scientists for the first time have made images of the surface of Saturn's giant, haze-shrouded moon, Titan. They mapped light and dark features over the surface of the satellite during nearly a complete 16-day rotation. One prominent bright area they discovered is a surface feature 2,500 miles across, about the size of the continent of Australia.

Titan, larger than Mercury and slightly smaller than Mars, is the only body in the solar system, other than Earth, that may have oceans and rainfall on its surface, albeit oceans and rain of ethane-methane rather than water. Scientists suspect that Titan's present environment—although colder than minus 289 degrees Fahrenheit, so cold that water ice would be as hard as granite—might be similar to that on Earth billions of years ago, before life began pumping oxygen into the atmosphere.

Peter H. Smith of the University of Arizona Lunar and Planetary Laboratory and his team took the images with the Hubble Space Telescope during 14 observing runs between Oct. 4 - 18. Smith announced the team's first results last week at the 26th annual meeting of the American Astronomical Society Division for Planetary Sciences in Bethesda, Md. Co-investigators on the team are Mark Lemmon, a doctoral candidate with the UA Lunar and Planetary Laboratory; John Caldwell of York University, Canada; Larry Sromovsky of the University of Wisconsin; and Michael Allison of the Goddard Institute for Space Studies, New York City.

Titan's atmosphere, about four times as dense as Earth's atmosphere, is primarily nitrogen laced with such poisonous substances as methane and ethane. This thick, orange, hydrocarbon haze was impenetrable to cameras aboard the Pioneer and Voyager spacecraft that flew by the Saturn system in the late 1970s and early 1980s. The haze is formed as methane in the atmosphere is destroyed by sunlight. The hydrocarbons produced by this methane destruction form a smog similar to that found over large cities, but is much thicker.

Smith's group used the Hubble Space Telescope's WideField/Planetary Camera 2 at near-infrared wavelengths (between .85 and 1.05 microns). Titan's haze is transparent enough in this wavelength range to allow mapping of surface features according to their reflectivity. Only Titan's polar regions could not be mapped this way, due to the telescope's viewing angle of the poles and the thick haze near the edge of the disk. Their image-resolution (that is, the smallest distance seen in detail) with the WFPC2 at the near-infrared wavelength is 360 miles. The 14 images processed and compiled into the Titan surface map were as "noise" free, or as free of signal interference, as the space telescope allows, Smith said.

Titan makes one complete orbit around Saturn in 16 days, roughly the duration of the imaging project. Scientists have suspected that Titan's rotation also takes 16 days, so that the same hemisphere of Titan always faces Saturn, just as the same hemisphere of the Earth's moon always faces the Earth. Recent observations by Lemmon and colleagues at the University of Arizona confirm this true.

It's too soon to conclude much about what the dark and bright areas in the Hubble Space Telescope images are—continents, oceans, impact craters or other features, Smith said. Scientists have long suspected that Titan's surface was covered with a global ehtane-methane ocean. The new images show that there is at least some solid surface.

Smith's team made a total 50 images of Titan last month in their program, a project to search for small scale features in Titan's lower atmosphere and surface. They have yet to analyze images for information about Titan's clouds and winds. That analysis could help explain if the bright areas are major impact craters in the frozen water ice-and-rock or higher-altitude features.

The images are important information for the Cassini mission, which is to launch a robotic spacecraft on a 7-year journey to Saturn in October 1997. About three weeks before Cassini's first flyby of Titan, the spacecraft is to release the European Space Agency's Huygens Probe to parachute to Titan's surface. Images like Smith's team has taken of Titan can be used to identify choice landing spots—and help engineers and scientists understand how Titan's winds will blow the parachute through the satellite's atmosphere.

UA scientists play major roles in the Cassini mission: Carolyn C. Porco, an associate professor at the Lunar and Planetary Laboratory, leads the 14-member Cassini Imaging Team. Jonathan I. Lunine, also an associate professor at the lab, is the only American selected by the European Space Agency to be on the three-member Huygens Probe interdisciplinary science team. Smith is a member of research professor Martin G. Tomasko's international team of scientists who will image the surface of Titan in visible light and in color with the Descent Imager/Spectral Radiometer, one of five instruments in the Huygens Probe's French, German, Italian and U.S. experiment payload. Senior research associate Lyn R. Doose is also on Tomasko's team. Lunine and LPL professor Donald M. Hunten are members of the science team for another U.S. instrument on that payload, the gas chromatograph mass spectrometer. Hunten was on the original Cassini mission science definition team back in 1983.

PHOTO CAPTION: Four global projections of the HST Titan data, separated in longitude by 90 degrees. Upper left: hemisphere facing Saturn. Upper right: leading hemisphere (brightest region). Lower left: the hemisphere which never faces Saturn. Lower right: trailing hemisphere. Not that these assignments assume that the rotation is synchronous. The imaging team says its data strongly support this assumption—a longer time baseline is needed for proof. The surface near the poles is never visible to an observer in Titan's equatorial plane because of the large optical path.