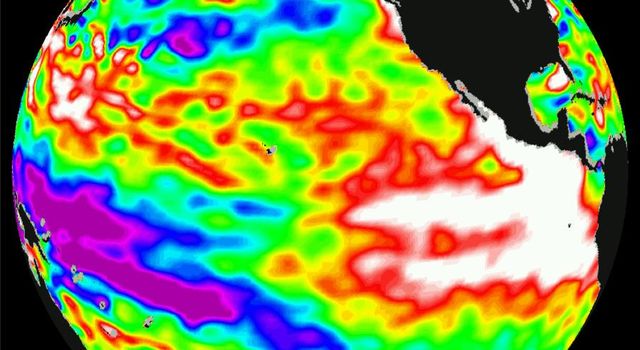 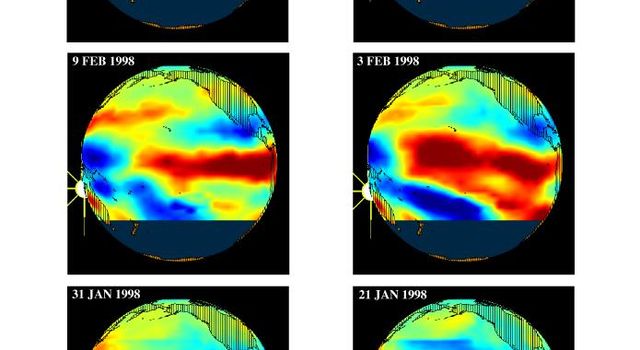 This image of the Pacific Ocean was produced using sea-surface height measurements taken by the U.S.-French TOPEX/Poseidon satellite. The image shows sea-surface height relative to normal ocean conditions on May 3, 1998, and sea-surface height is an indicator of the heat content of the ocean. The image shows that sea-surface height along the central and eastern equatorial Pacific has maintained a near normal state since March 1998. However, the western equatorial Pacific, shown here in purple, has not returned to a normal state and is still about 30 centimeters (12 inches) below normal sea level. Remnants of the El NiÃ±o warm water pool, shown in red and white, are situated to the north of the equator. Oceanographers indicate these measurements show that the Pacific has not yet fully recovered from this large El NiÃ±o event. These sea-surface height measurements have provided scientists with a detailed view of how the 1997-98 El NiÃ±o's warm water pool behaves because the TOPEX/Poseidon satellite measures the changing sea-surface height with unprecedented precision. In this image, the white and red areas indicate unusual patterns of heat storage; in the white areas, the sea surface is between 14 and 32 centimeters (6 to 13 inches) above normal; in the red areas, it's about 10 centimeters (4 inches) above normal. The green areas indicate normal conditions. The El NiÃ±o phenomenon is thought to be triggered when the steady westward blowing trade winds weaken and even reverse direction. This change in the winds allows a large mass of warm water (the red and white area) that is normally located near Australia to move eastward along the equator until it reaches the coast of South America. The displacement of so much warm water affects evaporation, where rain clouds form and, consequently, alters the typical atmospheric jet stream patterns around the world. Using satellite imagery, buoy and ship data, and a forecasting model of the ocean-atmosphere system, the National Oceanic and Atmospheric Administration, (NOAA), has continued to issue an advisory indicating the so-called El NiÃ±o weather conditions that have impacted much of the United States and the world are expected to remain through the spring.