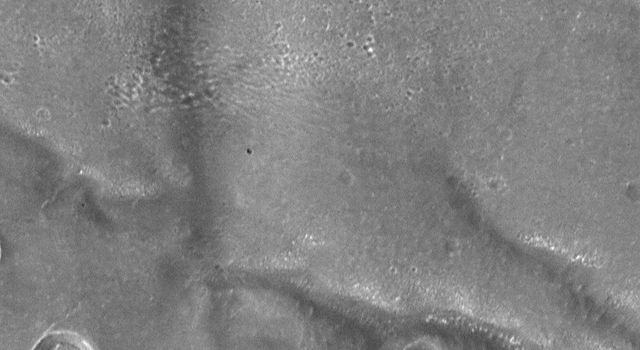 Observations (from the Thermal Emission Spectrometer, or TES, instrument) covering one half martian year allow us to follow the development of the northern winter polar vortex. This high speed west wind builds up from fall ("early October" in a calendar seasonally equivalent to the terrestrial calendar) to maximum strength in winter ("late December"). As spring approaches ("late March"), it gradually declines. At maximum strength its winds exceed 160 m/s (360 miles per hour). It also acts as an effective barrier to the northward transport of atmospheric dust; during its most active phase, only condensates (water and CO2 ices) were observed in its core. Detailed study of this effect is important to determine the accumulation of deposits on the permanent polar cap.

The TES instrument was built by Santa Barbara Remote Sensing and is operated by Philip R. Christensen, of Arizona State University, Tempe, AZ. The MGS mission is managed for NASA by the Jet Propulsion Laboratory, Pasadena CA.