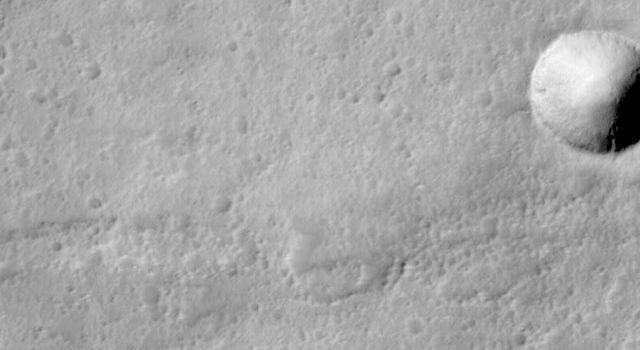 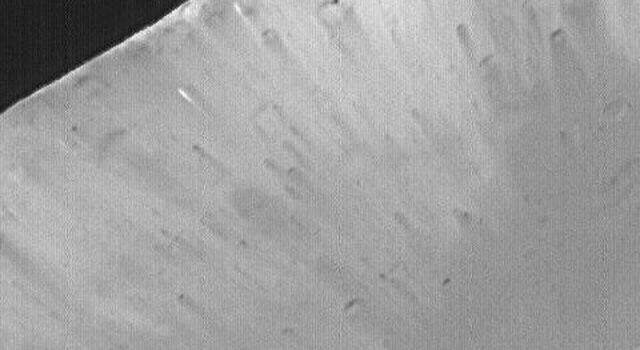 This image of Phobos, the inner and larger of the two moons of Mars, was taken by the Mars Global Surveyor on August 19, 1998. The minimum distance between the spacecraft and Phobos was 1,080 kilometers (671 miles). Phobos was observed by both the Mars Orbiter Camera (MOC) and Thermal Emission Spectrometer (TES). This image is one of the highest resolution images (4 meters or 13 feet per picture element or pixel) ever obtained of the Martian satellite. The image shows several new features of this lumpy moon -- features that are associated with the prominent crater seen in the upper left quarter of the image. This is the largest crater on Phobos, Stickney, 10 kilometers (6 miles) in diameter. Individual boulders are visible on the near rim of the crater (D), and are presumed to be ejecta blocks from the impact that formed Stickney. Some of these boulders are enormous - more than 50 meters (160 feet) across. Also crossing at and near the rim of Stickney are shallow, elongated depressions called grooves. This crater is nearly half the size of Phobos and these grooves may be fractures caused by its formation. The far wall of the crater shows lighter and darker streaks going down the slopes (C). The presence of material of different brightness on the far crater slopes and in some of the grooves shows that the satellite is heterogeneous (that is, it is made of a mixture of different types of materials). The motion of debris down slopes is guided by gravity, which is only about 1/1000th that of the Earth -- e.g., a 68-kilogram (150- pound) person would weigh only about 57 grams (2 ounces) on Phobos. Previous images from the Viking spacecraft in the 1970's were not of sufficient resolution to show the effectiveness of gravity on Phobos in moving material down slopes.