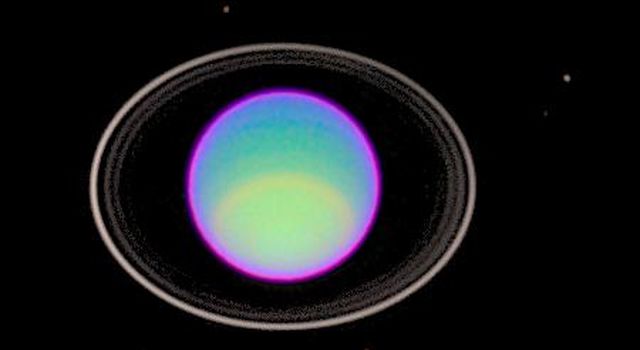 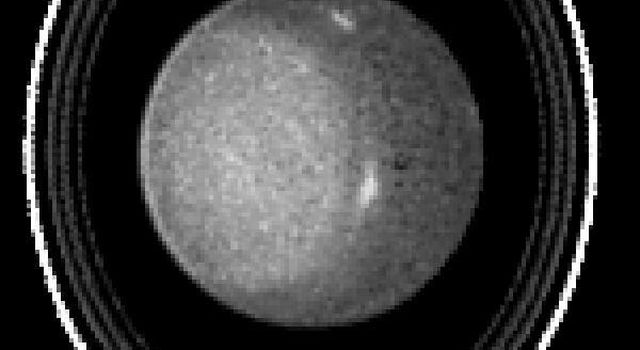 This NASA Hubble Space Telescope image of the planet Uranus reveals the planet's rings, at least five of the inner moons, and bright clouds in the planet's southern hemisphere. Hubble now allows astronomers to revisit the planet at a level of detail not possible since the Voyager 2 spacecraft flew by the planet briefly, nearly a decade ago.

Hubble's new view was obtained on August 14, 1994, when Uranus was 1.7 billion miles (2.8 billion kilometers) from Earth. Similar details, as imaged by the Wide Field Planetary Camera 2, were only previously seen by the Voyager 2 spacecraft that flew by Uranus in 1986 (the rings were discovered by stellar occultation experiments in 1977, but not seen directly until Voyager flew to Uranus). Since the flyby, none of these inner satellites has been observed further, and detailed observations of the rings and Uranus' atmosphere have not been possible, because the rings are lost in the planet's glare as seen through ground-based optical telescopes.

Each of the inner moons appears as a string of three dots in this picture because it is a composite of three images, taken about six minutes apart. When these images are combined, they show the motion of the moons compared with the sky background. Because the moons move much more rapidly than our own Moon, they change position noticeably over only a few minutes. (These multiple images also help to distinguish the moons from stars and imaging detector artifacts, i.e., cosmic rays and electronic noise).

Thanks to Hubble's capabilities, astronomers will now be able to determine the orbits more precisely. With this increase in accuracy, astronomers can better probe the unusual dynamics of Uranus' complicated satellite system. Measuring the moons' brightness in several colors might offer clues to the satellites' origin by providing new information on their mineralogical composition. Similar measurements of the rings should yield new insights into their composition and origin.

One of the four gas giant planets of our solar system, Uranus is largely featureless. HST does reveal a high altitude haze which appears as a bright "cap" above the planet's south pole, along with clouds at southern latitudes (similar structures were observed by Voyager). Unlike Earth, Uranus' south pole points toward the Sun during part of the planet's 84- year orbit. Thanks to its high resolution and ability to make observations over many years, Hubble can follow seasonal changes in Uranus' atmosphere, which should be unusual given the planet's large tilt.