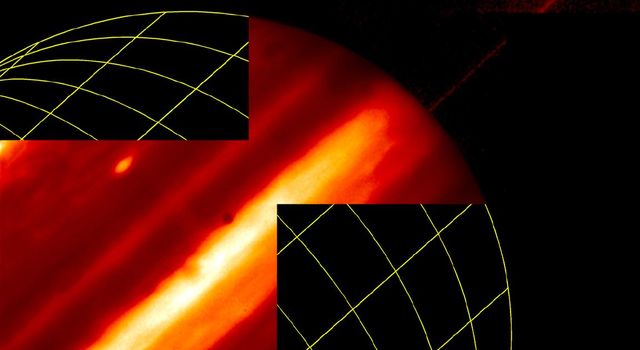 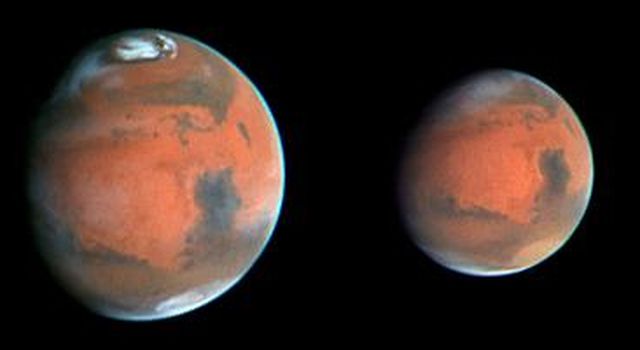 Images taken in ultraviolet light by the Space Telescope Imaging Spectrograph (STIS) show both auroras, the oval-shaped objects in the inset photos. While the Hubble telescope has obtained images of Jupiter's northern and southern lights since 1990, the new STIS instrument is 10 times more sensitive than earlier cameras. This allows for short exposures, reducing the blurring of the image caused by Jupiter's rotation and providing two to five times higher resolution than earlier cameras. The resolution in these images is sufficient to show the "curtain" of auroral light extending several hundred miles above Jupiter's limb (edge). Images of Earth's auroral curtains, taken from the space shuttle, have a similar appearance. Jupiter's auroral images are superimposed on a Wide Field and Planetary Camera 2 image of the entire planet. The auroras are brilliant curtains of light in Jupiter's upper atmosphere. Jovian auroral storms, like Earth's, develop when electrically charged particles trapped in the magnetic field surrounding the planet spiral inward at high energies toward the north and south magnetic poles. When these particles hit the upper atmosphere, they excite atoms and molecules there, causing them to glow (the same process acting in street lights).

The electrons that strike Earth's atmosphere come from the sun, and the auroral lights remain concentrated above the night sky in response to the "solar wind."