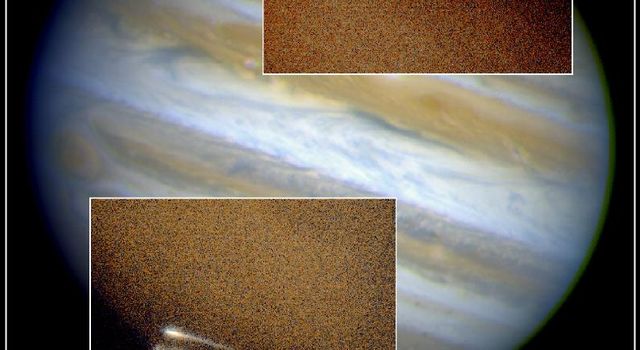 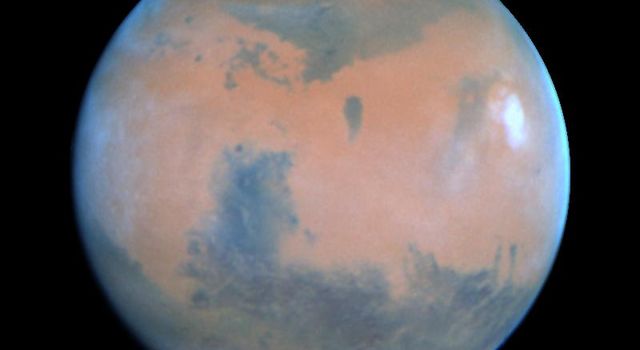 Springtime on Mars: Hubble's Best View of the Red Planet

This NASA Hubble Space Telescope picture of Mars was taken on Sept. 12, one day after the arrival of the Mars Global Surveyor (MGS) spacecraft and only five hours before the beginning of autumn in the Martian northern hemisphere. (Mars is tilted on its axis like Earth, so it has similar seasonal changes, including an autumnal equinox when the Sun crosses Mars' equator from the northern to the southern hemisphere).

This Hubble picture was taken in support of the MGS mission. Hubble is monitoring the Martian weather conditions during the early phases of MGS aerobraking; in particular, the detection of large dust storms are important inputs into the atmospheric models used by the MGS mission to plan aerobraking operations.

Though a dusty haze fills the giant Hellas impact basin south of the dark fin-shaped feature Syrtis Major, the dust appears to be localized within Hellas. Unless the region covered expands significantly, the dust will not be of concern for MGS aerobraking.

Other early signs of seasonal transitions on Mars are apparent in the Hubble picture. The northern polar ice cap is blanketed under a polar hood of clouds that typically start forming in late northern summer. As fall progresses, sunlight will dwindle in the north polar region and the seasonal polar cap of frozen carbon dioxide will start condensing onto the surface under these clouds.

Hubble observations will continue until October 13, as MGS carefully uses the drag of the Martian atmosphere to circularize its orbit about the Red Planet. After mid-October, Mars will be too close to the Sun, in angular separation, for Hubble to safely view.

The image is a composite of three separately filtered colored images taken with the Wide Field Planetary Camera 2 (WFPC2). Resolution is 35 miles (57 kilometers) per pixel (picture element). The Pathfinder landing site near Ares Valles is about 2200 miles (3600 kilometers) west of the center of this image, so was not visible during this observation. Mars was 158 million miles (255 million kilometers) from Earth at the time.

An image of this region of Mars, taken in June 1997, is shown for comparison. The Hellas basin is filled with bright clouds and/or surface frost. More water ice clouds are visible across the planet than in the Sept. image, reflecting the effects of the changing season. Mars appears larger because it was 44 million miles (77 million kilometers) closer to Earth than in the September image.