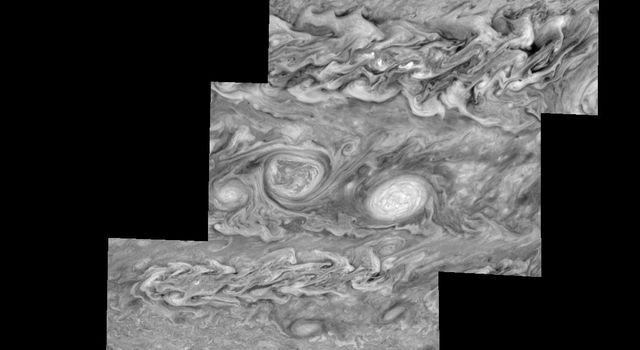 Mosaic of Jupiter's southern hemisphere between -25 and -80 degrees (south) latitude. In time sequence two, taken nine hours after sequence one, the limb is visible near the bottom right part of the mosaic. The curved border near the bottom left indicates the location of Jupiter's day/night terminator.

Jupiter's atmospheric circulation is dominated by alternating eastward and westward jets from equatorial to polar latitudes. The direction and speed of these jets in part determine the brightness and texture of the clouds seen in this mosaic. Also visible are several other common Jovian cloud features, including two large vortices, bright spots, dark spots, interacting vortices, and turbulent chaotic systems. The north-south dimension of each of the two vortices in the center of the mosaic is about 3500 kilometers. The right oval is rotating counterclockwise, like other anticyclonic bright vortices in Jupiter's atmosphere. The left vortex is a cyclonic (clockwise) vortex. The differences between them (their brightness, their symmetry, and their behavior) are clues to how Jupiter's atmosphere works. The cloud features visible at 756 nanometers (near-infrared light) are at an atmospheric pressure level of about 1 bar.

North is at the top. The images are projected onto a sphere, with features being foreshortened towards the south and east. The smallest resolved features are tens of kilometers in size. These images were taken on May 7, 1997, at a range of 1.5 million kilometers by the Solid State Imaging system on NASA's Galileo spacecraft.