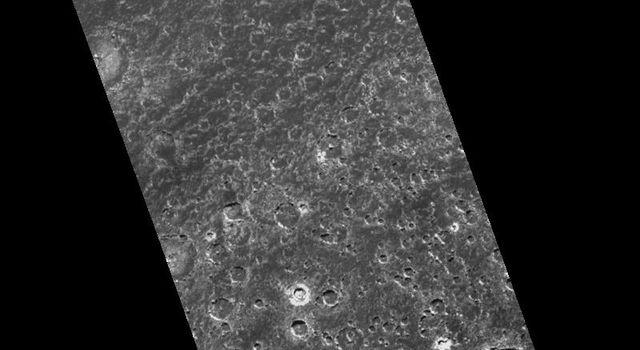 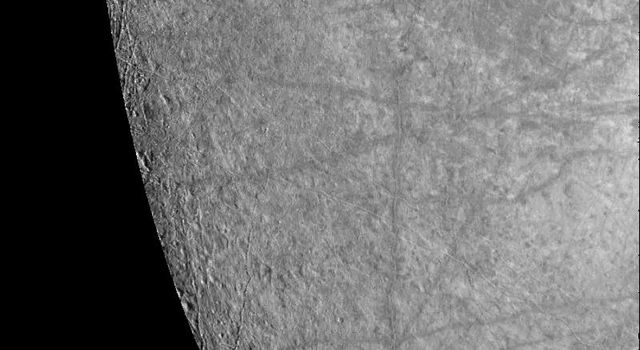 NASA's Galileo spacecraft provides a new view of this heavily cratered region in the southern hemisphere of the icy Jovian satellite Callisto. The region was not observed by NASA's Voyager spacecraft. Craters ranging in diameter from the 1.85 kilometer (1.13 mile) limit of resolution up to more than 70 kilometers (43 miles) can be observed in this image. Although all craters are generally round in outline, details in their structures vary with both size and relative age. Bright spots in the center of smaller craters (up to approximately 20 kilometers (12 miles)) are central peaks. Larger craters (up to the 51 kilometer (31 mile) wide crater in the east central part of the image) exhibit central pits or depressions. The largest crater, called Thrainn, has a diameter of 74 kilometers (45 miles) and is located in the southernmost corner of the image. This crater contains a broad central uplift, or dome, and has a highly eroded rim. In contrast, the 70 kilometer (43 mile) crater Audr, located along the northern margin of the image, is flat-bottomed, and has a less degraded and generally rounder rim. If erosional or degradational forces have been roughly constant with time on Callisto, scientists viewing this image can assume that Audr is relatively younger than Thrainn by noting the less degraded or fresher appearance of its rim. The differences in crater floor features between these two similarly sized craters could have been produced by differences in the impacting bodies that produced them, differences in the crustal materials in which the craters formed, or simply by a gradual evolution of crater floor shape with time.

North is to the top of the image which was taken by the Galileo spacecraft's solid state imaging (CCD) system during its eighth orbit around Jupiter on May 6th, 1997. The center of the image is located at 34 degrees south latitude, 84 degrees west longitude, and was taken when the spacecraft was approximately 48,430 kilometers (29,542 miles) from Callisto.