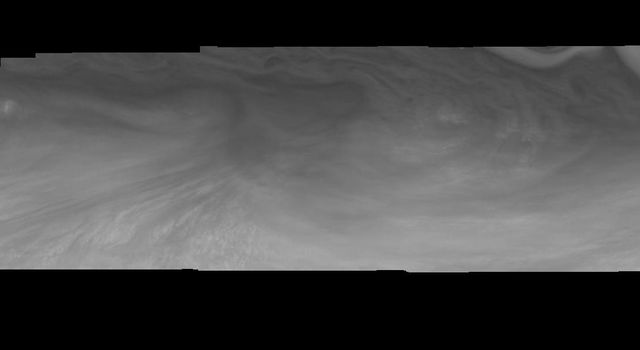 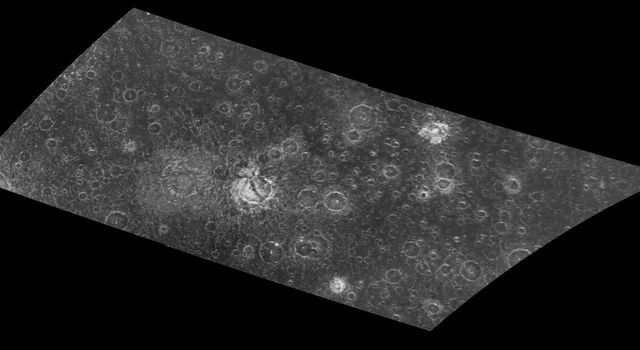 Craters in a Newly Imaged Area on Callisto

Mosaic of an equatorial "hotspot" on Jupiter at 889 nanometers (nm). The mosaic covers an area of 34,000 kilometers by 11,000 kilometers. Light at 889 nm is strongly absorbed by atmospheric methane. This image shows the features of a hazy cloud layer tens of kilometers above Jupiter's main visible cloud deck. This haze varies in height but appears to be present over the entire region. Small patches of very bright clouds may be similar to terrestrial thunderstorms. The dark region near the center of the mosaic is an equatorial "hotspot" similar to the Galileo Probe entry site. These features are holes in the bright, reflective, equatorial cloud layer where warmer thermal emission from Jupiter's deep atmosphere can pass through. The circulation patterns observed here along with the composition measurements from the Galileo Probe suggest that dry air may be converging and sinking over these regions, maintaining their cloud-free appearance.

North is at the top. The mosaic covers latitudes 1 to 10 degrees and is centered at longitude 336 degrees West. The smallest resolved features are tens of kilometers in size. These images were taken on December 17, 1996, at a range of 1.5 million kilometers by the Solid State Imaging system aboard NASA's Galileo spacecraft.