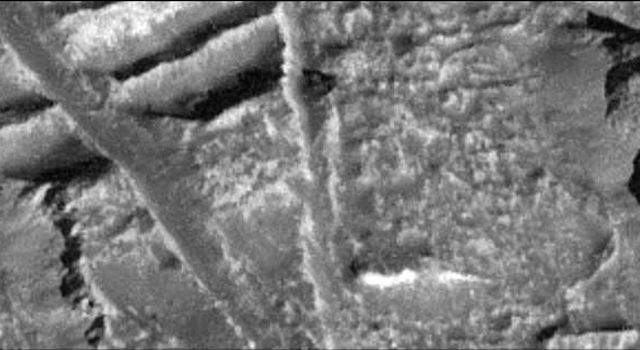 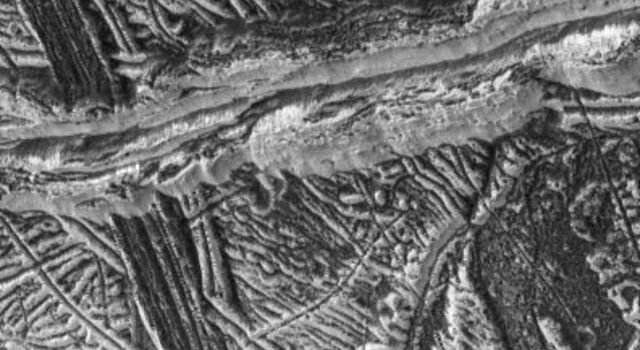 Dark and Bright Ridges on Europa

During its twelfth orbit around Jupiter, on Dec. 16, 1997, NASA's Galileo spacecraft made its closest pass of Jupiter's icy moon Europa, soaring 200 kilometers (124 miles) kilometers above the icy surface. This image was taken near the closest approach point, at a range of 560 kilometers (335 miles) and is the highest resolution picture of Europa that will be obtained by Galileo. The image was taken at a highly oblique angle, providing a vantage point similar to that of someone looking out an airplane window. The features at the bottom of the image are much closer to the viewer than those at the top of the image. Many bright ridges are seen in the picture, with dark material in the low-lying valleys. In the center of the image, the regular ridges and valleys give way to a darker region of jumbled hills, which may be one of the many dark pits observed on the surface of Europa. Smaller dark, circular features seen here are probably impact craters.

North is to the right of the picture, and the sun illuminates the surface from that direction. This image, centered at approximately 13 degrees south latitude and 235 degrees west longitude, is approximately 1.8 kilometers (1 mile) wide. The resolution is 6 meters (19 feet) per picture element. This image was taken on December 16, 1997 by the solid state imaging system camera on NASA's Galileo spacecraft.