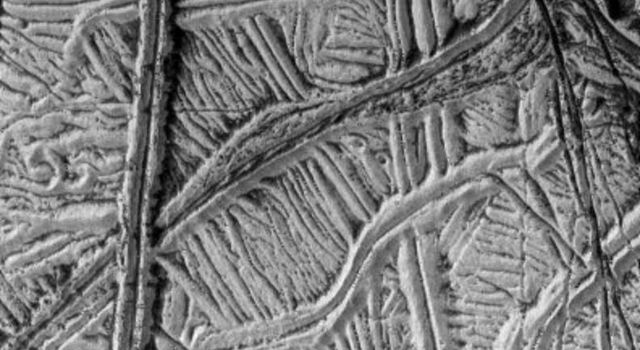 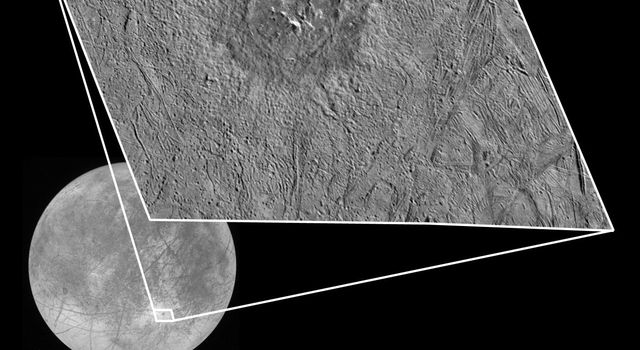 This view of the Conamara Chaos region on Jupiter's moon Europa taken by NASA's Galileo spacecraft shows an area where the icy surface has been broken into many separate plates that have moved laterally and rotated. These plates are surrounded by a topographically lower matrix. This matrix material may have been emplaced as water, slush, or warm flowing ice, which rose up from below the surface. One of the plates is seen as a flat, lineated area in the upper portion of the image. Below this plate, a tall twin-peaked mountain of ice rises from the matrix to a height of more than 250 meters (800 feet). The matrix in this area appears to consist of a jumble of many different sized chunks of ice. Though the matrix may have consisted of a loose jumble of ice blocks while it was forming, the large fracture running vertically along the left side of the image shows that the matrix later became a hardened crust, and is frozen today. The Brooklyn Bridge in New York City would be just large enough to span this fracture.

North is to the top right of the picture, and the sun illuminates the surface from the east. This image, centered at approximately 8 degrees north latitude and 274 degrees west longitude, covers an area approximately 4 kilometers by 7 kilometers (2.5 miles by 4 miles). The resolution is 9 meters (30 feet) per picture element. This image was taken on December 16, 1997 at a range of 900 kilometers (540 miles) by Galileo's solid state imaging system.