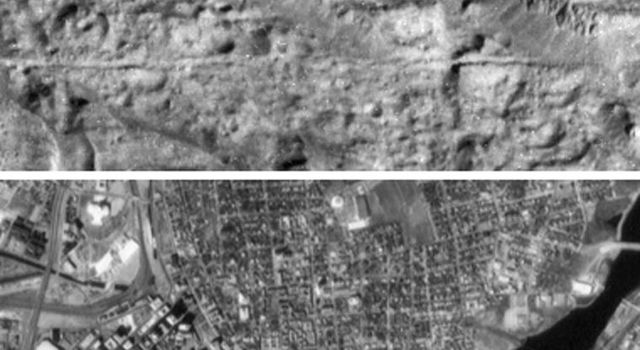 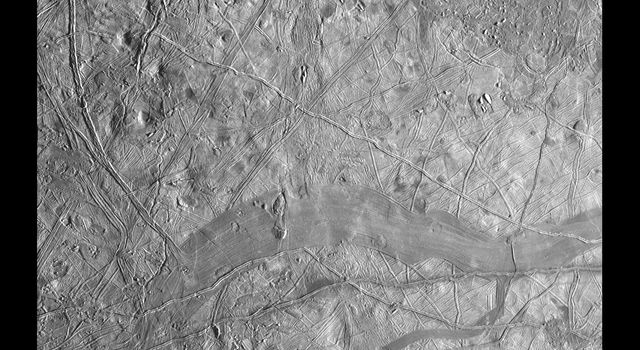 Regional Mosaic of Chaos and Gray Band on Europa

This mosaic shows some of the highest resolution images obtained by the Solid State Imaging (SSI) system on NASA's Galileo spacecraft during its eleventh orbit around Jupiter. North is to the top of the image. The sun illuminates the scene from the left, showing hundreds of ridges that cut across each other, indicating multiple episodes of ridge formation either by volcanic or tectonic activity within the ice. Also visible in the image are numerous isolated mountains or "massifs." The highest of these, located in the upper right corner and lower center of the mosaic, are approximately 500 meters (1,640 feet) high. Irregularly shaped areas where the ice surface appears to be lower than the surrounding plains (e.g., in the left-center and lower left corner of the mosaic) may be related to the "chaos" areas of iceberg-like features seen in earlier SSI images of Europa.

The mosaic, centered at 35.4 degrees north latitude and 86.8 degrees west longitude, covers an area of 108 kilometers by 90 kilometers (66 miles by 55 miles). The smallest distinguishable features in the image are about 68 meters (223 feet) across. These images were obtained on November 6, 1997, when the Galileo spacecraft was approximately 3,250 kilometers (1,983 miles) from Europa.

The Jet Propulsion Laboratory, Pasadena, CA manages the mission for NASA's Office of Space Science, Washington, DC. JPL is a division of California Institute of Technology.

This image and other images and data received from Galileo are posted on the World Wide Web, on the Galileo home page at URL http://galileo.jpl.nasa.gov. Background information and educational context for the images can be found at http://www.jpl.nasa.gov/galileo/sepo.