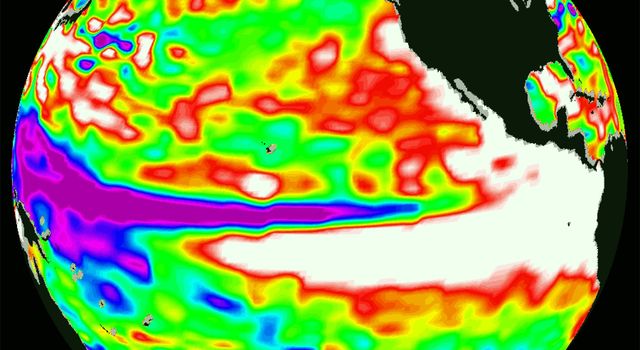 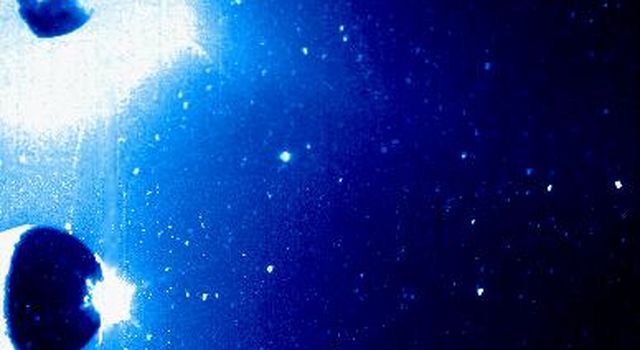 Io's Sodium Cloud (Clear and Green-Yellow Filters)
This image of Jupiter's moon Io and its surrounding sky is shown in false color. It was taken at 5 hours 30 minutes Universal Time on Nov. 9, 1996 by the solid state imaging (CCD) system aboard NASA's Galileo spacecraft, using a clear filter whose wavelength range was approximately 400 to 1100 nanometers. This picture differs in two main ways from the green-yellow filter image of the same scene which was released yesterday.

First, the sky around Io is brighter, partly because the wider wavelength range of the clear filter lets in more scattered light from Io's illuminated crescent and from Prometheus' sunlit plume. Nonetheless, the overall sky brightness in this frame is comparable to that seen through the green-yellow filter, indicating that even here much of the diffuse sky emission is coming from the wavelength range of the green-yellow filter (i.e., from Io's Sodium Cloud).

The second major difference is that a quite large roundish spot has appeared in Io's southern hemisphere. This spot -- which has been colored red -- corresponds to thermal emission from the volcano Pele. The green-yellow filter image bears a much smaller trace of this emission because the clear filter is far more sensitive to those relatively long wavelengths where thermal emission is strongest.