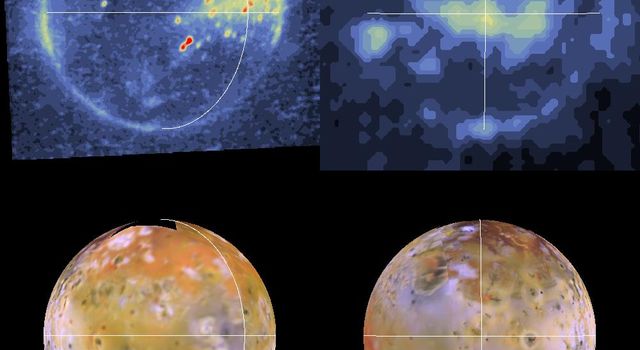 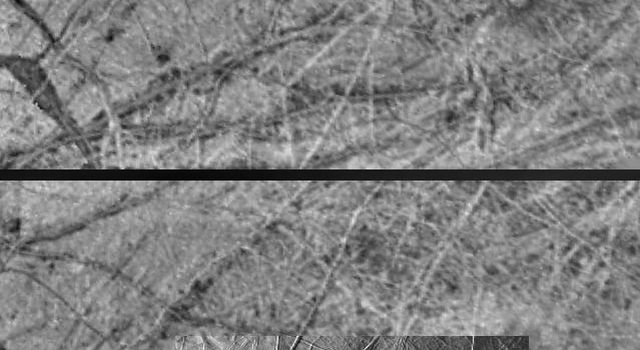 This composite image of part of the Jupiter moon, Europa, shows the distribution of ice and minerals for the structure named Tyre. The image was created with data from Galileo's Solid State Imaging (SSI) camera and the Near Infrared Mapping Spectrometer (NIMS). Tyre, the circular feature, is 140 kilometers in diameter (about the size of the island of Hawaii) and is thought to be the site where an asteroid or comet impacted Europa's ice crust. The blue in this image indicates areas with higher concentrations of mineral salts. These salts are similar in composition to those found in the bottom of Death Valley, California. The yellow-orange regions are areas that have a high surface abundance of water ice. The center of this impact feature (located at 34 degrees latitude and 146.5 degrees longitude) appears to have a surface composed of coarse-grained ice. This composite image is approximately 214 kilometers wide and is the product of a SSI image of 595 meters per picture element and a NIMS 6.26 kilometer per picture element observation. The SSI image and NIMS data were obtained on April 4, 1997 at ranges of 703,776 and 688,737 kilometers respectively. This image is projected like a map where north is up and is illuminated by sunlight coming from the west.