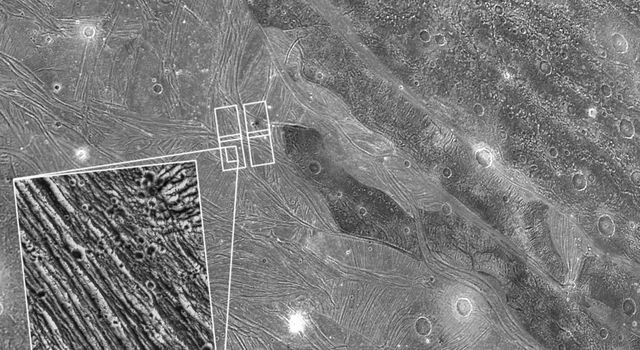 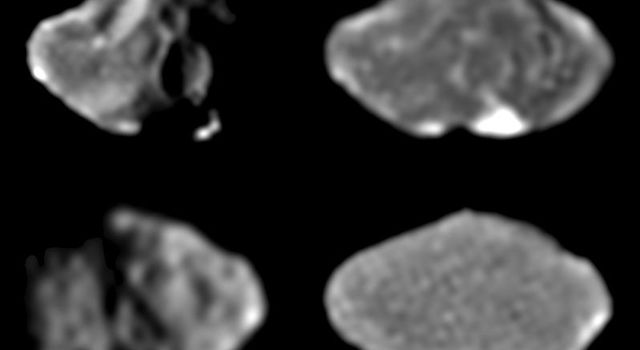 This circular 36 kilometer (22 mile) diameter impact crater near the north pole of Jupiter's moon Ganymede has a floor that is partially brightened. On September 6, 1996, NASA's Galileo spacecraft obtained images of an 18 kilometer (11 miles) wide swath through this area. The Galileo data, acquired at a resolution of 46 meters (151 feet) pixel (picture element), is shown overlain on data obtained by NASA's Voyager spacecraft in 1979. In Voyager data the crater was thought to be flooded by icy volcanism, but in Galileo data it is seen to be brightened by frost deposition. The Voyager data, taken at a resolution of 1.3 kilometers (0.8 miles) per pixel, shows a circular feature with a bright deposit on the northern half of its floor. North is toward the top of the picture. Illumination in the image is from the southeast, and frost appears to be collecting on north facing slopes of ridges and crater rims. Fractures cross the floor of the large crater, and the northeastern rim displays two large blocks of ice which have collapsed off the side of the steep crater wall. The Galileo images were taken by the Solid State Imaging (CCD) system at a range of about 2243 kilometers (1391 miles) from the surface of Ganymede.