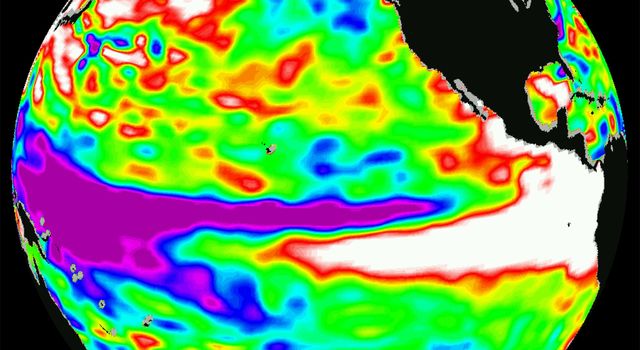 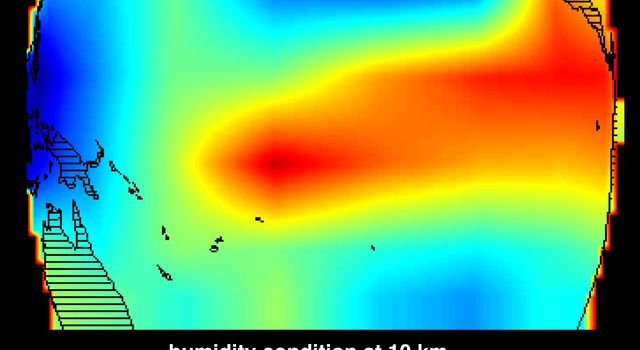 This image of the Pacific Ocean was produced using sea surface height measurements taken by the U.S./French TOPEX/POSEIDON satellite. The image shows sea surface height relative to normal ocean conditions on Oct. 23, 1997 as the warm water associated with El NiÃ±o (in white) spreads northward along the entire coast of North America from the equator all the way to Alaska. The warm water pool associated with the El NiÃ±o has returned to the volume it was in mid-September after dropping to a temporary low at the beginning of October. The sea surface elevation just north of the El NiÃ±o warm pool continues to drop (purple area), enhancing the eastward flowing North Equatorial Counter Current. The intensification of this current is another tell-tale sign of the El NiÃ±o phenomenon. This flow contributes to the rise in sea level along the western coasts of the Americas that will progress towards both the north and south poles over the next several months. The white and red areas indicate unusual patterns of heat storage; in the white areas, the sea surface is between 14 and 32 centimeters (6 to 13 inches) above normal; in the red areas, it's about 10 centimeters (4 inches) above normal. The surface area covered by the warm water mass is about one and one-half times the size of the continental United States. The added amount of oceanic warm water near the Americas, with a temperature between 21-30 degrees Celsius (70- 85 degrees Fahrenheit), is about 30 times the volume of water in all the U.S. Great Lakes combined. The green areas indicate normal conditions, while purple (the western Pacific) means at least 18 centimeters (7 inches) below normal sea level.

The El NiÃ±o phenomenon is thought to be triggered when the steady westward blowing trade winds weaken and even reverse direction. This change in the winds allows a large mass of warm water (the red and white area) that is normally located near Australia to move eastward along the equator until it reaches the coast of South America. The displacement of so much warm water affects evaporation, where rain clouds form and, consequently, alters the typical atmospheric jet stream patterns around the world. Using these global data, limited regional measurements from buoys and ships, and a forecasting model of the ocean-atmosphere system, the National Centers for Environmental Prediction (NCEP) of the National Oceanic and Atmospheric Administration, (NOAA), has issued an advisory indicating the presence of a strong El NiÃ±o condition throughout the winter.