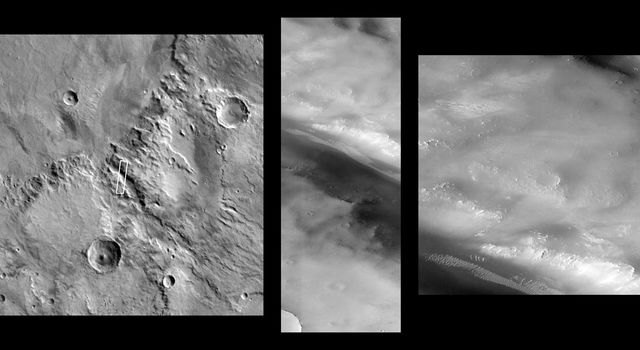 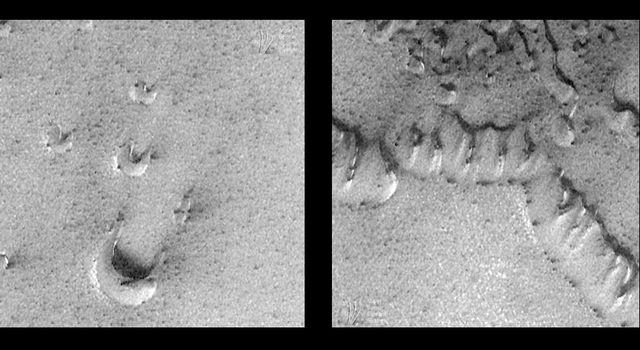 MOC images P013_01 and P013_02 were acquired with the low resolution red and blue wide angle cameras at 2:14 PM PDT on October 3, 1997, about 11 minutes after Mars Global Surveyor passed close to the planet for the thirteenth time. To make a color image, a third component (green) was synthesized from the red and blue images. During the imaging period, the spacecraft was canted towards the sun-lit hemisphere by 25°, and the MOC was obliquely viewing features from about 600 to 1000 km (360 to 600 miles) away. The resolution at those distances was between 350 and 600 meters (0.25 to 0.37 miles) per picture element. The image covers an area from 73° to 86° W longitude and 5° N to 10° S).

In both of the two images shown above, north is to the top. In the MOC image, the camera was viewing towards the west.

The left image is excepted from a U.S. Geological Survey shaded relief map, showing the footprint of the MOC wide angle color image. The large canyon system (Valles Marineris) spans this view; chaotic terrain is seen at the far right and the eastern-most of the four large Tharsis volcanoes (Ascraeus Mons) is shown in upper left.

The right image is the composite of MOC frames P013_01 and P013_02. Because the MOC acquires its images one line at a time, the cant angle towards the sun-lit portion of the planet, the spacecraft orbital velocity, and the spacecraft rotational velocity combine to distort the image slightly. However, the wide angle cameras provide a fairly realistic portrayal of what one would see looking out across Mars from the Orbiter. Notable in this image are the late afternoon clouds and hazes that are concentrated within the canyon system. This image is available at higher resolution as PIA00991.