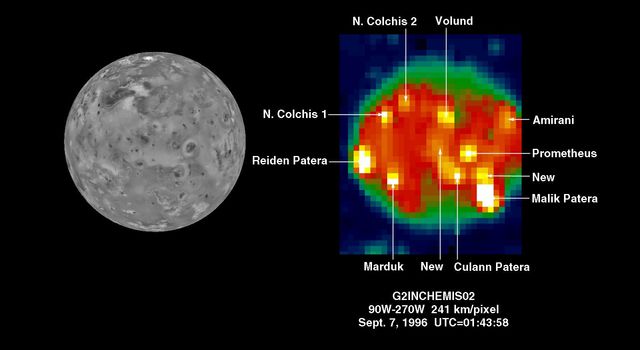 NIMS: hotspots on Io during G2 (continued)
The Near Infrared Mapping Spectrometer (NIMS) acquired this global mosaic (right) at a spatial resolution of 100 km during Galileo's third orbit on November 4, 1996, roughly 7.5 hours prior to Callisto closest approach.

The lighter bluish area in the upper latitudes is the Asgard multi-ring structure (the second largest surface feature on Callisto) with crater Burr to the north and Tornasuk to the east. The bluish color indicates regions with more exposed water ice while the reddish/rusty color indicates surface areas rich in non-ice minerals.