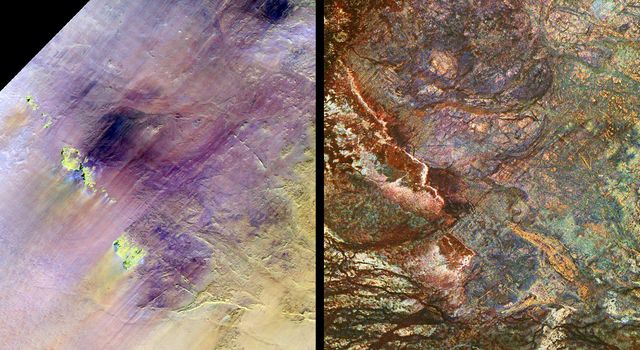 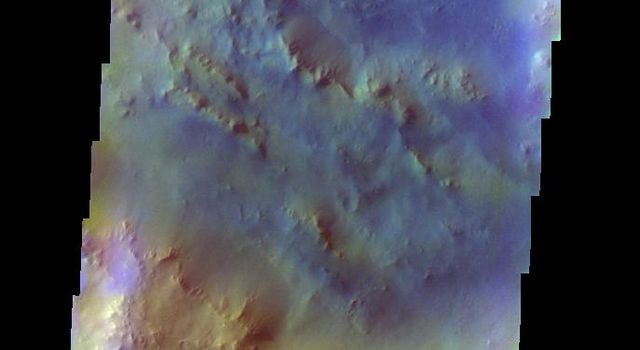 This radar image covers a portion of the Richtersveld National Park and Orange River (top of image) in the Northern Cape Province of the Republic of South Africa. The Orange River marks the boundary between South Africa to the south and Namibia to the north. This is an area of active mining for diamonds, which were washed downstream from the famous Kimberley Diamond Area, millions of years ago when the river was much larger. The mining is focused on ancient drainages of the Orange River which are currently buried by think layers of sand and gravel. Scientists are investigating whether these ancient drainages can be seen with the radar's ability to penetrate sand cover in extremely dry regions. A mine, shown in yellow, is on the southern bank of the river in an abandoned bend which is known as an "oxbow." The small bright circular areas (left edge of image) west of the mine circles are fields of a large ostrich farm that are being watered with pivot irrigation. The large dark area in the center of the image is the Kubus Pluton, a body of granite rock that broke through the surrounding rocks about 550 million years ago. North is toward the upper right. The area shown is about 55 by 60 kilometers (34 by 37 miles) centered at 28.4 degrees south latitude, 16.8 degrees east longitude. Colors are assigned to different radar frequencies and polarizations as follows: red is L-band horizontally transmitted and horizontally received; green is L-band horizontally transmitted and vertically received; blue is C-band horizontally transmitted and vertically received. The image was acquired on April 18, 1994 by the Spaceborne Imaging Radar-C/X-band Synthetic Aperture (SIR-C/X-SAR) imaging radar when it flew aboard the space shuttle Endeavour. SIR-C/X-SAR is a joint mission of the U.S./German and Italian space agencies.