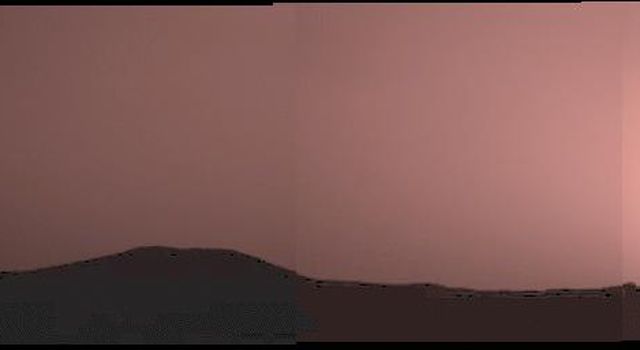 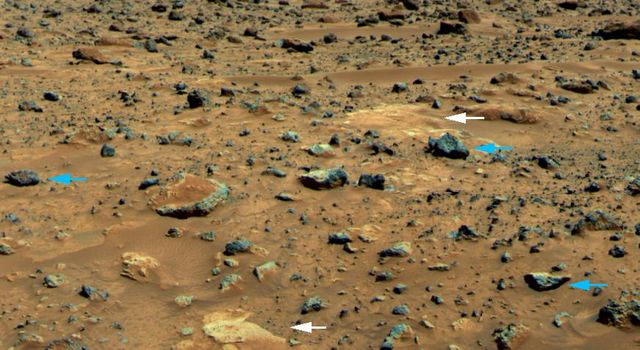 In this scene showing the rover deployed at rock "Yogi," the colors have similarly been enhanced to bring out differences. The same three kinds of rocks are recognized as in the distance. Yogi (red arrow), one of the large rocks with a weathered coating, exhibits a fresh face to the northeast, resulting perhaps from eolian scouring or from fracturing off of pieces to expose a fresher surface. "Barnacle Bill" and "Cradle" (blue arrows) are typical of the unweathered smaller rocks. During its traverse to Yogi the rover stirred the soil and exposed material from several cm in depth. During one of the turns to deploy Sojourner's Alpha Proton X-Ray Spectrometer (inset and white arrow), the wheels dug particularly deeply and exposed white material. Spectra of this white material show it is virtually identical to "Scooby Doo," and such white material may underlie much of the site. The lander's rear ramp, which Sojourner used to descend to the Martian surface, is at lower left.

Mars Pathfinder is the second in NASA's Discovery program of low-cost spacecraft with highly focused science goals. The Jet Propulsion Laboratory, Pasadena, CA, developed and managed the Mars Pathfinder mission for NASA's Office of Space Science, Washington, D.C. The Imager for Mars Pathfinder (IMP) was developed by the University of Arizona Lunar and Planetary Laboratory under contract to JPL. Peter Smith is the Principal Investigator. JPL is an operating division of the California Institute of Technology (Caltech).