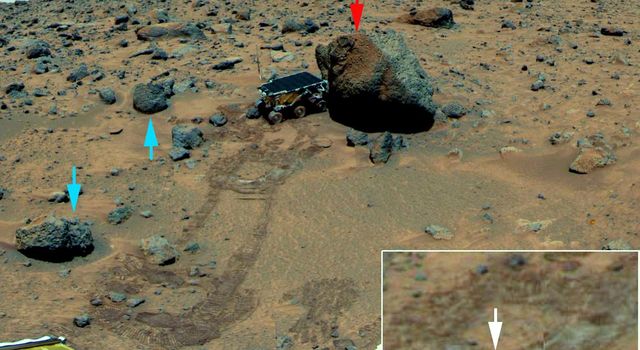 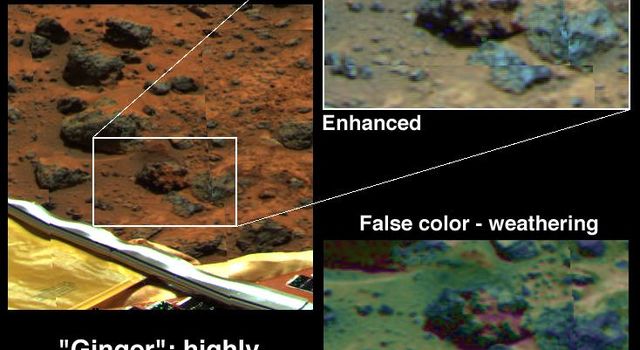 In this portion of the 360-degree color gallery pan, looking to the northeast, the colors have been exaggerated to highlight the differences between rocks and soils. Visible are the downwind sides of rocks, not exposed to wind scouring like "Barnacle Bill" (which faces upwind). There is a close correspondence between the shapes and colors of the rocks. Three general classes of rocks are recognized: large rounded rocks with weathered coatings, small gray angular rocks lacking weathered coatings, and flat white rocks. The large rounded rocks in the distance, marked by the red arrows, are comparable to "Yogi." Spectral properties show that these rocks have a highly weathered coating in addition to a distinctive shape. A second population of smaller, angular rocks (blue arrows) in the foreground have unweathered surfaces even on the downwind side, except where covered on their tops by drift. These are comparable to Barnacle Bill. They may have been emplaced at the site relatively recently, perhaps as ejecta from an impact crater, so they have not had time to weather as extensively as the larger older rocks. The third kind of rock (white arrows) is white and flat, and includes "Scooby Doo" in the foreground and a large deposit in the background called "Baker's Bank." The age of the white rock relative to the other two classes is still being debated. One representative rock of each class (Yogi, Barnacle Bill, and Scooby Doo) has been measured by the rover.

Mars Pathfinder is the second in NASA's Discovery program of low-cost spacecraft with highly focused science goals. The Jet Propulsion Laboratory, Pasadena, CA, developed and manages the Mars Pathfinder mission for NASA's Office of Space Science, Washington, D.C. The Imager for Mars Pathfinder (IMP) was developed by the University of Arizona Lunar and Planetary Laboratory under contract to JPL. Peter Smith is the Principal Investigator. JPL is an operating division of the California Institute of Technology (Caltech).