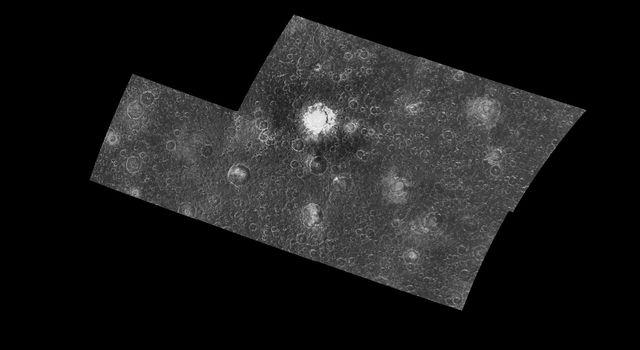 The images used to create this enhanced color composite of Io were acquired by NASA's Galileo spacecraft during its seventh orbit (G7) of Jupiter. Low sun angles near the terminator (day-night boundary near the left side of the image) offer lighting conditions which emphasize the topography or relief on the volcanic satellite. The topography appears very flat near the active volcanic centers such as Loki Patera (the large dark horse-shoe shaped feature near the terminator) while a variety of mountains and plateaus exist elsewhere. The big reddish-orange ring in the lower right is formed by material deposited from the eruption of Pele, Io's largest volcanic plume.

North is to the top of this picture which merges images obtained with the clear, red, green, and violet filters of the solid state imaging (CCD) system on NASA's Galileo spacecraft. The resolution is 6.1 kilometers per picture element. The images were taken on April 4th, 1997 at a range of 600,000 kilometers.

Concurrent results from Galileo's exploration of Io appear in the October 15th, 1997 issue of Geophysical Research Letters. The papers are: