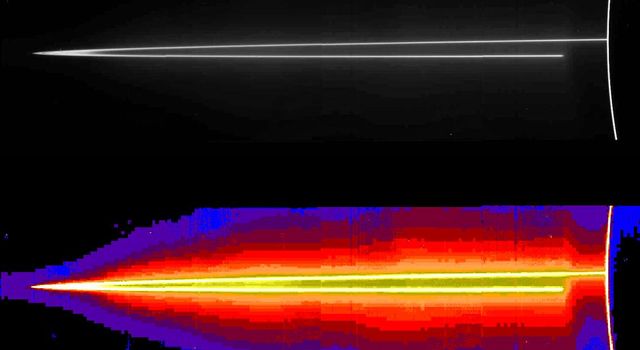 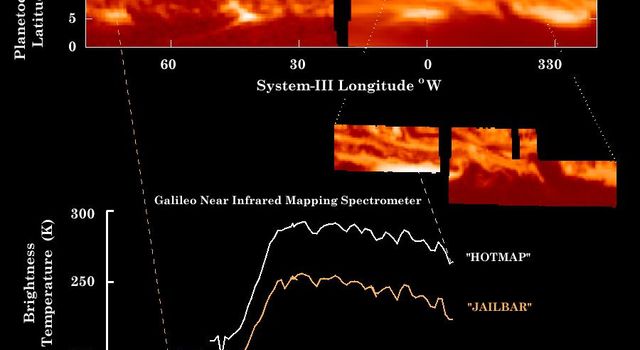 Oval cloud systems of this type are often associated with chaotic cyclonic systems such as the balloon-shaped vortex seen here between the well-formed ovals. This system is centered near 30 degrees south latitude relative to the center of the planet and 100 degrees west longitude, and rotates in a clockwise direction about its center. The oval shaped vortices in the upper half of the mosaic are two of the three long-lived white ovals that formed to the south of the Great Red Spot in the 1930's and, like the Great Red Spot, rotate in a counterclockwise sense.

The east-to-west dimension of the left-most white oval is 9,000 kilometers (5,592 miles) across. For comparison, the diameter of Earth is 12,756 kilometers, or 7,928 miles. The white ovals drift in longitude relative to one another and are presently restricting the cyclonic structure. To the south, the smaller oval and its accompanying cyclonic system are moving eastward at about 0.4 degrees per day relative to the larger ovals. The interaction between these two cyclonic storm systems is producing high, thick cumulus-like clouds in the southern part of the more northerly trapped system.

The top mosaic combines the violet (410 nanometers) and near infrared continuum (756 nanometers) filter images to create a mosaic similar to how Jupiter would appear to human eyes. Differences in coloration are due to the composition and abundance of trace chemicals in Jupiter's atmosphere.

The lower mosaic uses the Galileo imaging camera's three near-infrared wavelengths (756 nanometers, 727 nanometers, and 889 nanometers displayed in red, green, and blue) to show variations in cloud height and thickness. Light blue clouds are high and thin, reddish clouds are deep, and white clouds are high and thick. The clouds and haze over the white ovals are high, extending into Jupiter's stratosphere. There is a lack of high haze over the cyclonic feature. Dark purple most likely represents a high haze overlying a clear deep atmosphere. Galileo is the first spacecraft to distinguish cloud layers on Jupiter.

North is at the top of these mosaics. The smallest resolved features are tens of kilometers in size. These images were taken on February 19, 1997, at a range of 1.1 million kilometers (683,507 miles) by the solid state imaging (CCD) system aboard NASA's Galileo spacecraft.