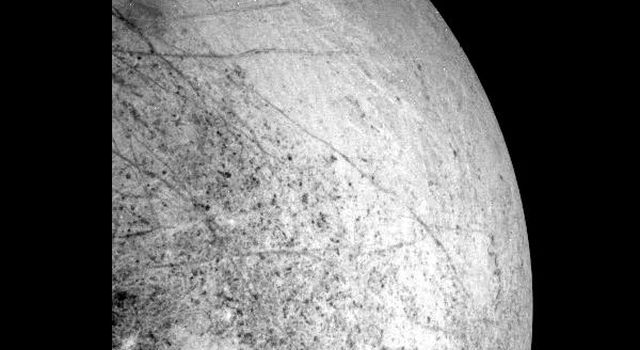 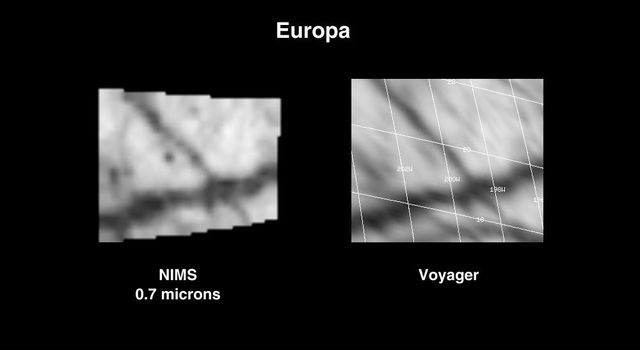 A mosaic of four images taken through the clear filter (610 nanometers) of the solid state imaging (CCD) system aboard NASA's Galileo spacecraft on November 8, 1996, at a resolution of approximately 46 kilometers (km) per picture element (pixel) along the rings; however, because the spacecraft was only about 0.5 degrees above the ring plane, the image is highly foreshortened in the vertical direction. The images were obtained when Galileo was in Jupiter's shadow peering back toward the Sun; the ring was approximately 2,300,000 kilometers (km) away. The arc on the far right of the image is produced by sunlight scattered by small particles comprising Jupiter's upper atmospheric haze. The ring also efficiently scatters light, indicating that much of its brightness is due to particles that are microns or less in diameter. Such small particles are believed to have human-scale lifetimes, i.e., very brief compared to the solar system's age.

Jupiter's ring system is composed of three parts -- a flat main ring, a lenticular halo interior to the main ring, and the gossamer ring, which lies exterior to the main ring. The near and far arms of Jupiter's main ring extend horizontally across the mosaic, joining together at the ring's ansa, on the far left side of the figure. The near arm of the ring appears to be abruptly truncated close to the planet, at the point where it passes into Jupiter's shadow. Some radial structure is barely visible across the ring's ansa. A faint mist of particles can be seen above and below the main rings; this vertically extended "halo" is unusual in planetary rings, and is probably caused by electromagnetic forces pushing the smallest grains out of the ring plane. Because of shadowing, the halo is not visible close to Jupiter in the lower right part of the mosaic.

Jupiter's main ring is a thin strand of material encircling the planet. The diffuse innermost boundary begins at approximately 123,000 km. The main ring's outer radius is found to be at 128,940 +/-50 km, slightly less than the Voyager value of 129,130 +/-100 km, but very close to the orbit of the satellite Adrastea (128,980 km). The main ring exhibits a marked drop in brightness at 127,849 +/-50 km, lying almost atop the orbit of the Jovian moon Metis at 127,978 km. Satellites seem to affect the structure of even tenuous rings like that found at Jupiter.

This image and other images and data received from Galileo are posted on the World Wide Web, on the Galileo mission home page at: http://galileo.jpl.nasa.gov. Background information and educational context for the images can be found at: http:/ /www.jpl.nasa.gov/galileo/sepo.